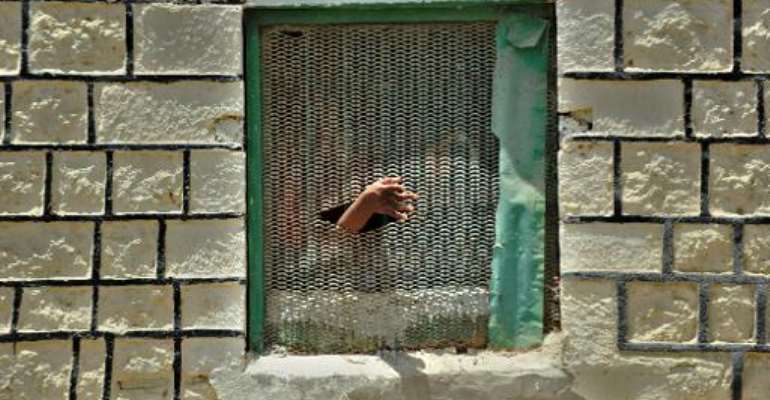 File picture taken on March 30, 2011 shows an inmate pushing his hand out through a hole on a window grille at the Berbera prison in Somalia's breakaway republic of Somaliland. By Tony Karumba (AFP/File)

Mogadishu (AFP) - A Somali court on Monday sentenced to jail a woman who said she was raped and two journalists who broadcast her story, saying they were guilty of defamation and insulting state institutions.

The 19-year old woman, who is also a journalist, was handed a suspended six-month jail sentence for defamation and lying, during which time she will be confined to her home, said Judge Hashi Elmi Nur.

The journalists are to serve out their sentences, of one year and six months respectively, or pay a fine in order to win early release.

It is the second time this year Somalia has jailed a woman for speaking out about rape and journalists for interviewing her.

"The manager of Radio Shabelle Abdulmalik Yusuf was found guilty of offending state institutions, and therefore will serve a prison term of one year," the judge told the court.

"Journalist Mohamed Bashir was found guilty of defamation and making false rape accusations, so he is given a six-month jail term."

Both have the possibility of paying a fine to leave jail, equivalent to around a dollar per day of their sentence, so around 365 dollars (265 euros) for Yusuf, and 180 dollars (130 euros) for Bashir.

Rape, and reporting on sexual assault, is one of the most sensitive topics in Somalia.

The alleged victim last month told the independent Radio Shabelle she was attacked and raped at gunpoint by two fellow journalists.

But it was the journalists who listened to her story who were jailed.

Last month the United Nations in Somalia called for a "proper investigation" into the case, while Washington said it was "deeply concerned".

Neither of the men accused of the rape were arrested.

In February, a Somali journalist and a rape victim he interviewed were both sentenced to a year in prison after being found guilty of "offending state institutions".

In that case, the court found the woman had lied after a midwife conducted a "finger test" to see if she had been raped, which Human Rights Watch (HRW) said was an "unscientific and degrading practice that has long been discredited".

They were released two months into their jail term after the case sparked widespread international criticism.

In August, a Somali woman who alleged she was gang-raped by African Union soldiers was also held by police for questioning.

Last month HRW called on the government to order a new and impartial investigation into that case, saying the response to the incident "has been marred by mismanagement, opacity, and the harassment of the female rape survivor and support service providers".

This "points to security officials trying to silence both those who report the pervasive problem of sexual violence and those who help rape survivors", HRW added.

Somalia's internationally-backed government has repeatedly said that rape and sexual violence against women "are completely unacceptable in Somali culture", but has previously declined to comment on specific cases. It has also insisted it protects press freedom.

Somalia is one of the most dangerous countries in the world for journalists.

Eighteen media professionals were killed in Somalia in 2012, the east African country's deadliest year on record, according to Reporters Without Borders (RSF).

At least six media workers have been killed this year.