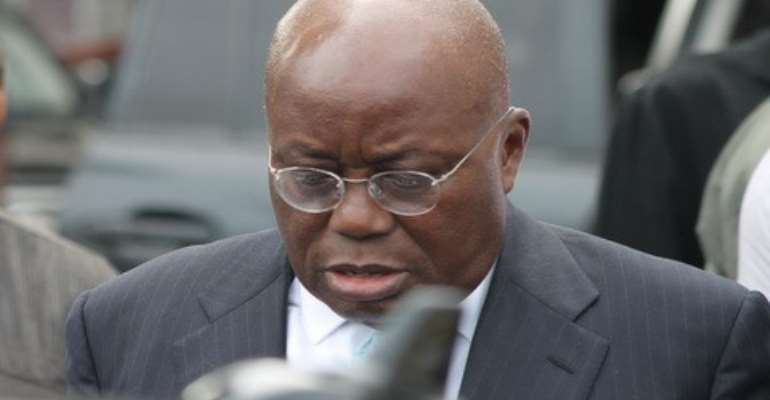 Two-time presidential candidate of the main opposition New Patriotic Party (NPP), Nana Addo Dankwa Akufo-Addo, has urged his party to use all legitimate means possible to win the 2016 elections.

According to him, the failure of the current government makes it imperative for the NPP to use all legitimate means to win power.

“I think it is obvious to all of us here tonight that our opponents or competitors for political power are incapable of running our country well. It is clear that our opponents are good at being declared winners of elections but are bad at governing our nation. It means that whatever it legitimately takes, we have to make sure that at the next election, not only do we win it but are actually declared the winners. That is the responsibility before us”.

Nana Akufo-Addo was speaking at a dinner hosted by the UK chapter of the Young Executive Forum (a global network of professionals and entrepreneurs) at the Blue Elephant Restaurant in London Sunday.

He said: “We have inside and outside our party, the men and women who can put our country on a really solid path of development and transformation. We have a responsibility to ourselves, the people of Ghana and to posterity, to make sure that come what may, in 2016, we don't have a court case or a false declaration”.

“At the end of it all, apart from getting the power, is the whole more important process of transforming our country. I want all of you to put your minds to the things that we need to do to modernise and transform our country. That is the goal”, he said.

According to him, “the goal is not the power and being called president or minister. It is the transformation of our nation, bringing it up to join the comity of modern, developed and prosperous nations. That is the goal. That is the mission and let us work harder than ever to make that happen”.