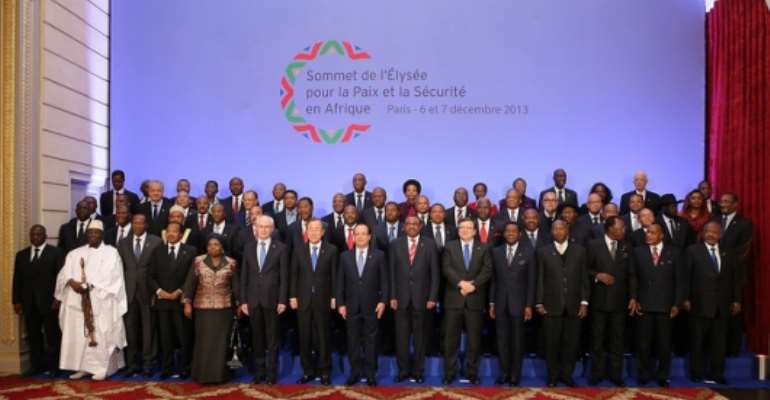 France has pledged to support Africa's economic development with 20 billion euros over the next five years.

Consequently, France has decided to set up a France-Africa Foundation to provide technical assistance, strategies and plans for assisting Africa's economic development, including financial support.

It has also promised to support the setting up of an African stand-by force with training and other technical assistance.

These were part of the decisions that France reached with African heads of state and government at the end of the Élysée Summit for Peace and Security in Paris, France, on Saturday.

Economic partnership
A communique adopted at the end of the summit said the Heads of State and Governments affirmed their determination to modernise their relationship with France to spur on economic exchanges.

"They emphasised the need to promote quality growth, which creates jobs, based on the balanced mobilisation of physical, human and natural capital.

"They encourage a sustainable economy based notably on renewable energy sources and making good use of the oceans," the communique said.

Security
On security, the communique said the heads of state and government called for a reform of the UN Security Council to increase the role of Africa in the framework of an enlarged Council.

It said the heads of state highlighted the importance of building African crisis response capacities, and called for a major increased predictability in the financing of African peacekeeping operations.

Climate change
According to the communique, the leaders called for a binding agreement on climate change, which would apply to all countries and must enter into by 2020.

They stressed the need for a balanced climate agreement in Paris in 2015, focusing on subjects including mitigation and adaptation, finance, technology transfer as well as capacity building.

President Mahama
Sharing his views on the summit in an interview with journalists in Paris, France on Saturday, President John Dramani Mahama said the issue of the Economic Partnership Agreements (EPA), which at the summit zeroed in on West Africa in particular, was very important.

For instance, he said, in West Africa, Ghana and Côte d'Ivoire were the two countries that had taken the initial steps towards ratifying an interim partnership agreement.

"That is because Ghana and Côte d'Ivoire are the largest exporters into the European Union market and stand to suffer the most if EPAs are not ratified," he said.

Happily, President Mahama said, the common external tariff was agreed at the last ECOWAS Summit in Dakar, and indicated that an impetus was given to negotiate the EPAs.

"So currently, as far as I am informed West Africa has made a market access offer to the EU, which is currently under negotiation.

"So my hope is that by next year before the deadline, which is October, 2014, we should be able to negotiate a regional agreement rather than Côte d'Ivoire and Ghana unilaterally going ahead to sign the EPAs," he said.

On security, President Mahama said the support offered by France in peacekeeping operations in Africa was welcome, and that it did not constitute any neo-colonial interference.

"The point I make is that we live in what is called a global village now, and what happens in one part of the globe affects the other," he said.

Galamsey fight: Four Chinese nationals to be deported
49 minutes ago

Gov't must opt out of Sputnik-V vaccine procurement contract...
49 minutes ago