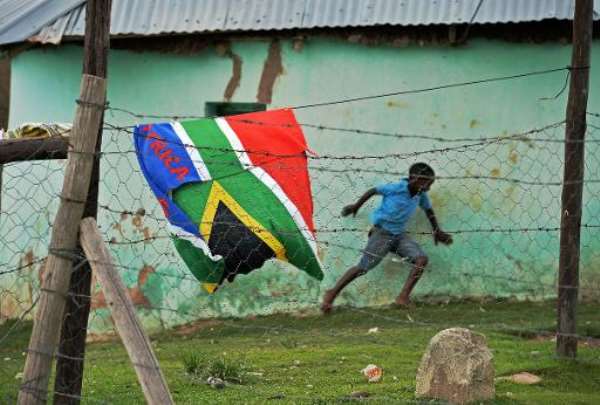 Johannesburg (AFP) - The presidents of the United States and Cuba will share a rare joint stage Tuesday as world leaders shed historic rivalries to pay tribute at the funeral of South African freedom icon Nelson Mandela.

Barack Obama and Raul Castro will both offer eulogies for Mandela at a sweeping memorial service to be held at the Soweto stadium that hosted the 2010 World Cup final.

They are among more than 90 heads of state and government scheduled to attend an extended state funeral that will culminate in Mandela's burial on Sunday in the rural village of Qunu where he spent his early childhood.

A massive security operation will swing into place as 80,000 people descend on the Soweto venue for what is seen as a final chance for grieving South Africans to unite in a mass celebration of Mandela's life ahead of the more formal lying in state.

The Indian and Brazilian presidents will also speak, reflecting the extraordinary global reach, popularity and influence of one of the 20th century's towering political figures.

Four of Mandela's adored grandchildren will speak for his family, while neither his widow, Graca Machel, nor his ex-wife Winne Madikizela-Mandela are listed on the programme.

Some 120,000 people will be able to watch the event on giant screens set up in three overflow stadiums in Johannesburg.

'You are never prepared enough'

Although Mandela had been critically ill for months, the announcement of his death on Thursday night still rocked a country that had looked to his unassailable moral authority as a comforting constant in a time of uncertain social and economic change.

"I don't think you are ever prepared enough," said Zelda la Grange, who was Mandela's long-time personal assistant both during and after his presidency.

"We had prepared ourselves emotionally but still we are overcome by this feeling of loss and sadness," La Grange said.

A single candle was lit Monday in Mandela's tiny prison cell on Robben Island, where he spent the harshest of his 27 years in apartheid jails, before emerging to lead his country out of the shadow of apartheid into a multi-racial democracy.

The government has sought to dissuade A-list dignitaries from attending Sunday's burial in Qunu, citing its rural location, the lack of amenities and limited space.

Ahead of the burial, Mandela's body will lie in state for three days from Wednesday in the amphitheatre of the Union Buildings in Pretoria where he was sworn in as president in 1994.

Each morning, his coffin will be borne through the streets of the capital in a funeral cortege, to give as many people as possible the chance to pay their final respects.

Around 11,000 troops have been mobilised to ensure security and help with crowd control.

Despite the sudden influx of international dignitaries and the compressed preparation time, National Police spokesman Solomon Makgale insisted that the security apparatus could cope.

"Having so many heads of state is not a security headache for us. We've learned over the years," Makgale said, adding that they would be "working closely" with the foreign leaders' own security details.

As well as Obama and three previous occupants of the White House, British Prime Minister David Cameron, French President Francois Hollande and Afghan President Hamid Karzai were all on the guest list.

'He has handed us the baton'

UN Secretary General Ban Ki-moon, who was among the first to arrive, visited the Nelson Mandela Foundation in Johannesburg where he paid handsome tribute to a "giant for justice" whose "mighty life" touched millions.

Parliament met in special session Monday, with MPs carrying single red roses as they entered the assembly building that was flanked by giant portraits of Mandela in tribal dress and as an elder statesman.

Opposition leader Helen Zille said every politician had a duty to carry forward Mandela's ideals of justice and equality for all.

"He has handed the baton to us and we dare not drop it," Zille said.

Africa will be represented at the funeral by Nigeria's Goodluck Jonathan and more than a dozen other heads of state and government.

Notable absentees include Israeli Prime Minister Benjamin Netanyahu, who cited high travel and security costs, and Mandela's fellow Nobel peace laureate, the Dalai Lama, who since 2009 has twice been denied a visa for South Africa.

Talk show queen Oprah Winfrey and singer-activist Bono, as well as British billionaire Richard Branson and musician Peter Gabriel were expected to be among the celebrity mourners.