Black armbands for Mandela as India bowl against S.Africa 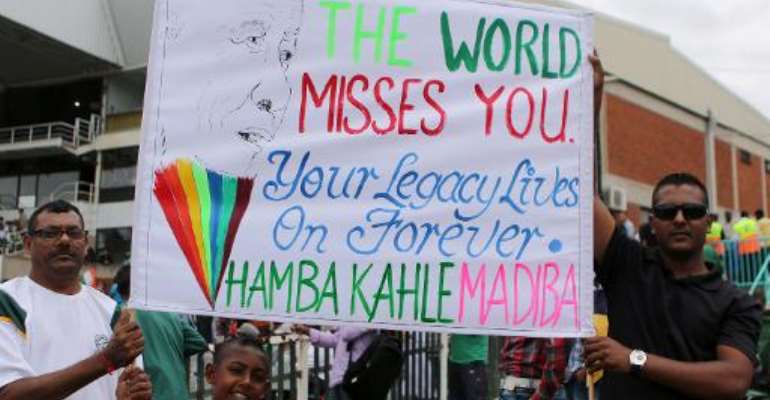 Cricket fans hold a poster paying homage to Nelson Mandela during the one-day international match between India and South Africa in Durban on December 8, 2013. By Anesh Debiky (AFP)

Durban (South Africa) (AFP) - India won the toss and decided to bowl in the second one-day international against South Africa at Kingsmead in Durban on Sunday.

Both teams wore black armbands and the players and crowd stood for a minute's silence in memory of former South African president Nelson Mandela, who died on Thursday.

Archbishop Njongonkulu Ndungane, the former Archbishop of Cape Town, said a prayer before the singing of the national anthems.

A wet outfield delayed the start of play by an hour and a half. The match was reduced to 49 overs a side.

India made three changes after losing the first match in Johamnnesburg by 141 runs.

Batsman Yuvraj Singh was not fit, according to captain Mahendra Singh Dhoni, and was replaced by Ajinkya Rahane. Bowlers Bhuvneshwar Kumar and Mohit Sharma were replaced by Ishant Sharma and Umesh Yadav.

South Africa made one change. Vernon Philander, who missed the first match because of a shoulder injury, replaced Wayne Parnell.