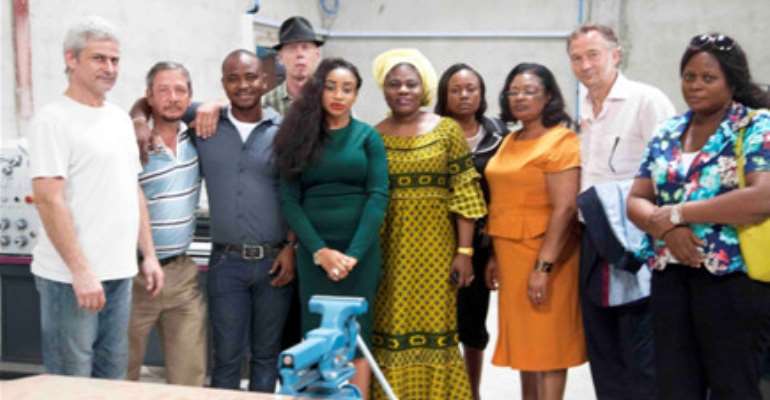 Optimism overwhelmed me when the news got to me. It was not what I believed it was possible. Somehow, I heard that there was an automobile training centre at Igurutta, Port Harcourt, Rivers State which was established by the Niger Delta Development Corporation and the Empowerment Support Initiative(set up by the wife of the Rivers State's governor) to train indigent and uneducated youths from the Niger Delta(mostly ex-militants) on how to not only work on damaged cars, but also to even assemble cars.

To get this going, expatriate trainers from Germany were recruited. Plus the trainees were even housed and catered for with a monthly allowance of ten thousand naira paid to them. To me, it was unbelievable. Such a thing was not possible in the Nigeria that I know. But then, I was wrong because it was indeed true.

So I when heard that the first graduation party for these selected sets of (to me favoured) youths who had been taught by selected people from Germany with the best equipments was holding, I put aside all engagements and went to witness it myself.

It was a well organised ceremony attended by some dignitaries including the Rivers State commissioner for Women affairs Mrs Joeba West,the host of the Empower Africa Initiative-Princess Halliday Show, Ms. Princess Halliday; and so many others. I was happy to meet with these people especially the Empower Africa Initiative people whom I feel have been working extra hard to showcase positivity in Africa. I was happy. So happy that at least the government has decided to do something for the people.

Until the clouds turned. First it was a smattering of rain. Then came the destruction of property. All vehicles in the compound had their tires deflated. The Commissioner and the host of the Empower Africa Initiative--Princess Halliday Show, and the four German tutors were hounded until I and my friends had to secure them in the workshop of the complex and form a barricade.Bottles were broken and windscreens shattered. There were threats of burning down the building later at night if we do not let them manhandle the officials. The police people watched on, and did not react.

I tried to find out from the protesting militants (whom the government had been so kind to provide such a training opportunity for) the reason behind the anger. I am ashamed to write that they said they were angry that after the training(remember they were paid stipends, and fed too) , the government did not pay them for(wait for this) "wasting" three months learning.As the destruction and riot continued, the Empowerment Support Initiative and the NDDC sent a negotiating team who even went as far as offering the irate youths fifty thousand naira each(there were over two hundred graduands),yet they refused and insisted that each of them must be paid two million naira cash before anybody could leave the premises. A staff at the place (NDDC/ESI automobile training center)was bold enough to tell me that the government did not try.

She was insistent that the government did wrong. According to her; "How can you say you are empowering them and not give them money? Instead don't set up the place, just give them the money. How can you say you are empowering people and not give them money?".
I never knew that knowledge was not empowerment. I never knew that a government does that for its people and it is counted for nothing. I never also knew I would be supporting a part of the government against my youths. Yet I must always be truthful in all I write.
It was only the intervention of soldiers and the State Security Service that saved us all that day.

As I struggle with sleep, the stuffs that bother me are these;

I hope the government of Rivers State and the NDDC do not take this singular incident as a yardstick for measuring Nigerian youths.
I hope the Empower Africa Initiative do not recant their motto of showcasing positivity in Africa.
I hope that the commissioner for women affairs Rivers State who was accommodating enough to us all that day despite the high pressure of "near death" continues to believe her sermon that "this is why we have to clean up the society and the youths"

Finally, I hope too that as youths we would not allow a few people destroy the little chances that the government gives us to pursue our dreams. Because to me, the actions of those youths that day reeks of ingratitude and pure manifestation of the corruption we are all fighting against.