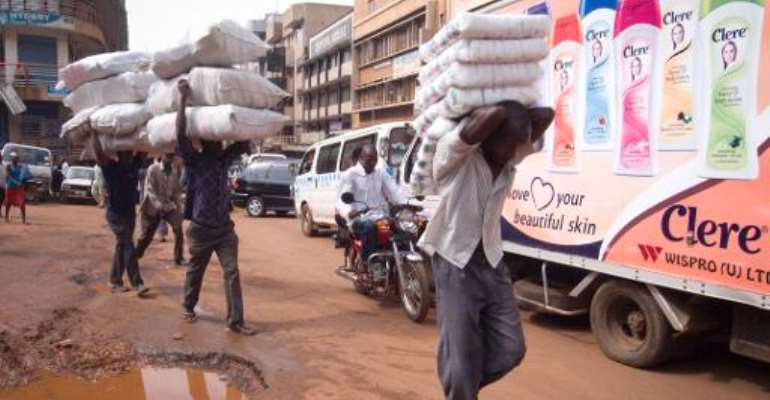 This photo from November 10, 2011 shows vendors in Owino market in Kampala. By Michele Sibiloni (AFP/File)

Kampala (AFP) - More than 80 Ugandans were injured in riots in the capital Kampala after the country's main market was engulfed in a fire Wednesday, Red Cross officials said.

The blaze broke out in the early hours of Wednesday morning in Kampala's Owino market, sparking furious protests from traders who had lost their stock in the inferno.

Security forces moved in to break up the rioters, firing tear gas and live ammunition, with shops closed and streets empty around the market for much of Wednesday.

"Injuries included bullet wounds and deep wounds resulting from stones," Red Cross spokeswoman Catherine Ntabadde said in a statement, adding that 28 had been taken to hospital with serious wounds, and 53 were treated for more minor injures.

"Minor injuries include fainting, effects of tear gas, bruises and cuts," she said.

A large part of it was destroyed by the flames.

Fires have broken out at the trading site four times in the past five years.

Uganda fire chief Joseph Mugisha said the cause of the latest fire was not yet known, but investigations were ongoing.

"The fire could not be easily contained in time... the market is crowded," he said.