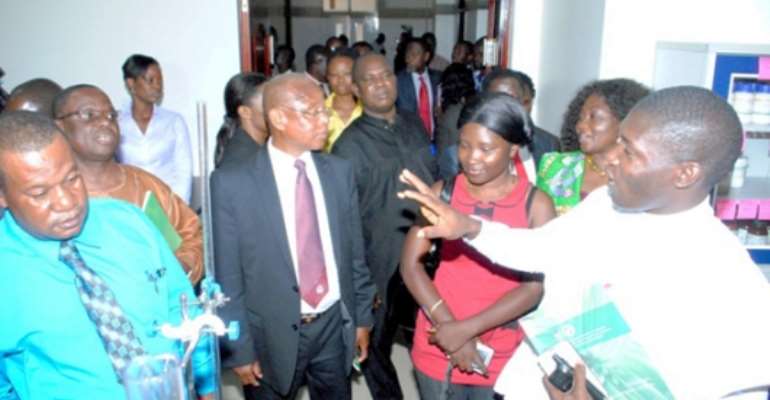 The chairmen of two parliamentary select committees have described the establishment of Africa Institute of Sanitation and Waste Management  (K-AISWAM), an affiliate of the Kwame Nkrumah University of Science and Technology, as a bold step for Ghana to effectively manage its waste and improve the environment.

They have, therefore, commended the Executive Chairman of Jospong Group of Companies, Dr Joseph Siaw Agyapong, for establishing the institute and urged him to continue his vision of partnering the government and other institutions in the development of the country's economy.

The two chairmen, Mr Dominic Azimbe Azuma and Mr Simon Edem Asimah of the Local Governments and Environment, Science and Technology respectively,  made the remarks when a delegation from both committees visited the K-AISWAM located at Ashalley Botwe, near Accra.

The visit afforded members of the joint committee the opportunity to learn at first-hand the courses and programmes offered at the institute, and how positively they would impact on the country's development.

Local Government committee
According to Mr Azuma, all the concerns they have had from the districts had centred on sanitation and waste management.

He said the government spent huge sums of money on waste management, and added that the establishment of the institute would help change the attitude of the people towards waste management.

He expressed the hope that products of the institute would get to the field and help transform the attitude of the people.

Environment, Science and Technology
Mr Asimah expressed optimism that the institute through its research would provide effective environmental management interventions to deal with sanitation in the country.

He gave an assurance that the committee was committed to assisting the institute to grow and train graduates equipped with the requisite technological know-how in combating waste and sanitation problems.

About the Institute
The Business Development Director of K-AISWAM, Mr Patrick Cline, said the institute was established to help meet the technological and human resource needs of the waste management industry.

He noted that there was growing recognition of the inability of the traditional waste management systems to cope with the volumes of waste generated daily in the country.

Mr Cline said for the country to be able to take up the challenge of managing waste in an environmentally sustainable manner, there was the need for new and improved methods of waste management that employed modern technologies with trained human resources.

He stated that the institute, among others, would provide people with the required skills to ensure efficient waste management using modern technology.