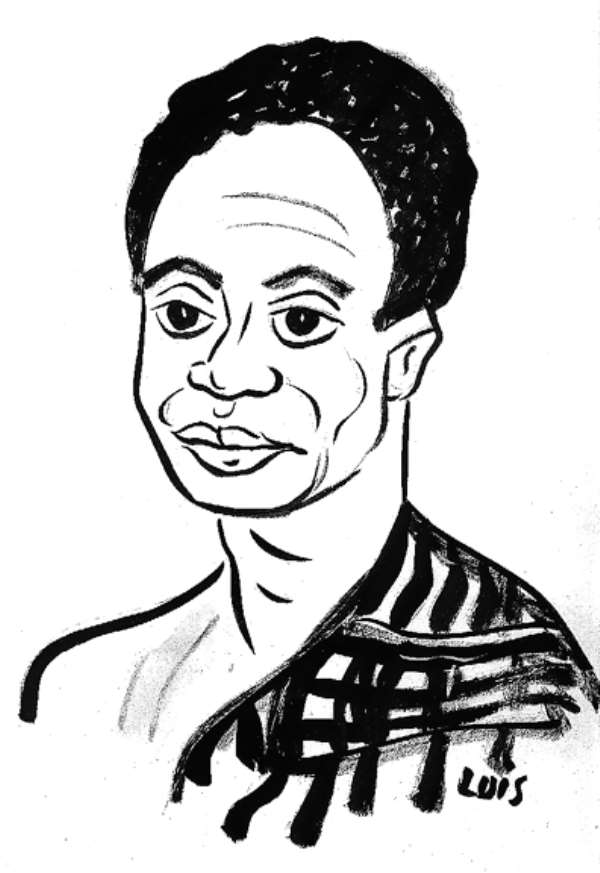 What, really, drives a person to seek political office in Ghana? Is it the quest for personal wealth (greed), the aura and prestige of the office (hubris), or a genuine conviction that one can do something for the people (selfless sacrifice)? I suggest that it is all three of the above – in descending order of importance!

There may be other reasons like pressure being put upon one by well-meaning or significant others, ambitious spouses wanting to bask in the glory of their partners whom they push to reach beyond themselves, or persons who think they may benefit from a particular individual occupying a specific post which they, themselves, cannot successfully aspire to. There are also persons born in families where the patriarch was in politics and the scions find that line of occupation a natural choice for them. Then there are people, mostly of a leftist bent, driven by purely ideological reasons to seek power in order to change society according to their convictions. These other reasons are of relatively little importance in the Ghanaian context.

Every Ghanaian is aware of the fact that the major driving force behind a decision to enter a political race is the desire to acquire wealth. This may sound cynical but there is hardly any need to prove it. No politician is foolish enough to admit this upfront. Nobody enters politics in Ghana and comes out a poor man. Just look at the fortunes of anybody who held political office in Ghana. It is only those who try but do not succeed that live to regret it. Even those who are already rich before seeking political office still have their eyes on the wealth. They either want to maintain their riches or increase the booty.

There is some resentment in Ghana against certain young men and women who have never done any “real” work apart from politics by which they have become immensely rich and influential. Because of the numerous interruptions in our practice of party politics and the relatively short time of our existence as a nation, our country has not built a tradition in which the young, through the party youth wings, enter politics at an early age and spend their entire life there. Anybody trying to do that now sticks out. The few young people who succeed in politics become enviable eyesores to their contemporaries still searching for jobs. If political office did not come with so much ill-gotten wealth in a country where so many are poor, people will not be concerned by this development.

Other people have to work hard to achieve the same things that politicians can get overnight. When a university lecturer sees someone he has taught at school suddenly achieve fame and wealth as a politician, he is also tempted to enter politics. In the same way, if you see your classmate in the village become rich and influential as your local DCE, why won't you also want the same things for yourself? After all, becoming a politician is relatively easy. You do not have to attend any special school which is difficult to gain entry into. It is not like a professional body where you have to pass difficult exams and strict entry requirements to be admitted. Anybody can, in principle, become a politician.

By Ghanaian standards, parliamentarians and ministers are extremely well remunerated in cash and kind. Their basic salaries are high and they enjoy many benefits. They are housed, provided with servants and even garden boys. The end of service benefits for our political office holders is mouth-watering. Even the smallest political posts down the line can be turned into gold mines. DCEs have lots of influence which can be translated to monetary terms. Assembly men know how to make money.

Our constitution gives the President a lot of power to make many top-level appointments – ministerial positions, ambassadorial postings, senior jobs in state institutions, etc. Many of these are politically determined even where the positions require technical expertise. Civil service rules don't allow civil servants to play politics but in Ghana, all the senior-most civil servants are openly sympathetic to one party or the other.

There are many government contracts to be given out to party faithful. Some party members become businessmen or contractors overnight when their party wins. Then there are all the hangers on – the so-called foot soldiers. They complain bitterly when nothing comes their way after victory is won.

Greed can be a positive driving force behind entrepreneurial effort in a capitalist system. But that is not the kind of greed with which our politicians approach their task. They often reap where they have not sown. Taking a kickback on a contract is not a service that increases total productivity in society. It is a misallocation of resources for which society, as a whole, loses. It may be argued that kickbacks can be profitably invested in the economy. This is not likely. Our politicians rather use their ill-gotten wealth in conspicuous consumption.

Political office comes with a lot of prestige in Ghana. We worship office holders. Our tradition teaches us to respect our parents, the elderly, those in authority and the traditional chiefs. When this is transferred, wholesale, to practices in the modern state the result is not a pleasant one.

Nkrumah exploited this phenomenon to build a cult around his person. It is not known if he specifically asked for it but he never stopped it and certainly revelled in it. There was no shortage of praise singers. He expropriated the respect and adulations traditionally reserved for our chiefs and warriors: Osagyefo, Kantamanto, Osuodumgya, Kasapreko, Abransamandu, Katawere, Opambuo Kwame… He allowed many things to be named after him.

Today, we have gone beyond the worst excesses of this practice. We no longer put the portrait of a living president on our currency. But there are still some remnants left. There seems to be an unwritten lese majesté rule in Ghana that says one cannot pronounce the name of the president without preceding it with “His Excellency” even in unofficial situations. The president's portrait still adorns public offices and classrooms across the country as if we wouldn't know he was our president without that. When a new president comes along, all these pictures are changed at great cost. Parliamentarians and ministers are called “Honourable” by the general public. Even the President's wife is called “Her Excellency”. This is ridiculous!

Go to any minister's office in Accra and you will be shocked at the number of supplicants waiting to see “Oga the Minister” with various requests. Some of these are chiefs with their elders from distant parts of the country waiting patiently to see the minister who may be some small boy or girl who has risen up the political ladder. This need to beg office holders for often legitimate demands may also lie behind the undue respect we give to such officers – a situation that easily breeds fawning sycophants.

If we accord so much respect to our political office holders, why won't unscrupulous persons strive to enter politics and gain some respectability in their societies despite the sordid deeds they do in secret?

Another adverse effect of this kind of “fanfoo” respect is that it often gets into the heads of the office holders who gradually acquire a certain sense of entitlement. They are overwhelmed by the vanities of the office and start believing that we, the people, should be indebted to them for leading us. But we should not be. After all, there has never been a shortage of persons wanting to lead us.

What Ghanaians want most are selfless leaders who can solve our problems and do so without enriching themselves at our expense. Of all our past leaders, it is only Nkrumah, his shortcomings notwithstanding, who came nearest to that ideal. But he lived in a different time under different conditions. It was a time when we were starting off and there was a lot of genuine desire on the part of our leaders to succeed. Even Nkrumah's opponents, Danquah and Busia, were imbued with this sense of commitment to the betterment of the country. They did not know, at that time, that their best intentions would turn to something else.

Nkrumah took this idealism furthest. For him, the success or failure of the nation he was leading was a very personal thing. He was not only competing with his political opponents at home, but also with his fellow African leaders and the world at large. He wanted so much to win and the measure of that victory was the success story that he could boast about with Ghana. The coup that toppled him may have been the most devastating thing that happened to him. It was a personal failure – one that tortured him until the day he died. He was tortured not because he had not stashed away riches for his personal use or had missed out on generous end of service benefits (he never saw himself out of office and did not think of such things) but because of the shattering of the dream that he had for Ghana. How many of our present leaders can that be said of?

Today, the pecuniary motive overshadows more idealistic motives as the major driving force in our politics. Will fewer people be interested in politics if the monetary benefits are not so great? Of course, we should reward our leaders adequately and make the posts attractive. At the same time as we do this, we also leave the field open to unconscionable and unprincipled people who, in the nature of things, are the ones who succeed most in using dubious means to achieve their personal ends. You must be a rogue to steal money without compunction. That is why selfless men of integrity are not attracted to our politics. Even the few righteous ones who dare enter politics are easily corrupted by the system.

How do we force our leaders to put the interests of the people ahead of their personal gains? That is a question none of us has found an answer to. It is not that we have not tried. We have but all our efforts have, so far, not yielded any results. For instance, we have laws in place for office holders to declare their assets on assuming and on leaving office but what has become of these laws? We are not closing the many loopholes in the system because those who should do so have an interest in leaving them open.

If we are lucky, we may come across a leader of unique qualities who is strong and wise enough to solve our problems. As at now, there is no such person on the horizon. Great leaders do not come often. Our system is not even designed to bring them forth. Two major political parties, none of which has any redeeming features, are holding all of us to ransom. Leadership in each of them is determined by a coterie of kingmakers, founders and financiers who serve interests that do not coincide with those of society as a whole.

Gentle reader, do not believe those going around telling us that this particular politician or that other man will be the best leader for us. Nobody knows a great leader ahead of his proving his mettle. A good leader is known only after the event. Even Nkrumah's leadership qualities were acknowledged only from hindsight. But Nkrumah, the son of a poor village goldsmith, will lose if he stands for political office in today's Ghana.

It is such a pity that today's politicians have quite literally taken up Nkrumah's exhortation to seek first the political kingdom. Those few who enter that kingdom are being amply rewarded with material wealth at the expense of the people. Nkrumah must be turning in his grave!