In Ghana Life Is Cheap But Politics Rule 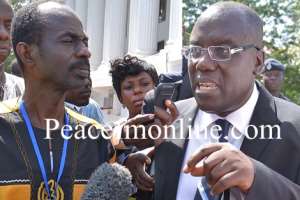 In the week that Ronnie Coaches of Buk Bak fame died, a contrivance of malaria-humanity's most dreaded plague- ensured that I undertook back-to-back visits to the hospital to access medical care on behalf of two of my children aged 5 and 3 respectively.

The good news is that we were able to access a private hospital in our neighborhood and so didn't have to go through the stress and the drama associated with accessing good health care delivery in our public hospitals.

At the end of our largely uneventful and less dramatic experience, however, the emotional, physical and financial toll on my fragile body was telling. It broke down for a few days.

Sounding like a broken record
A kaleidoscope of Ghanaians access health care facilities in this country on a daily basis. Among the lot, several dozen are emergency cases which to all intents and purposes require or demand specialized care.

If you were fortunate to be resident in Accra, Kumasi and any of the other big cities, your chances of been saved (emergency) or been comprehensively taken care of was high.

However if your accessibility was not good as in the case of millions of our kith and kin, you were likely going to end up on the table of the pathologist instead of a bed in the ward. And in Ghana it is the little, tiny, itty, bitty things we fail to do that kill people.

Scores of patients die en route to emergency centers while many more end up in the morgue instead of the ward because some medical personnel either failed to act timeously or give the required medication and attention. Many more are lost as a result of the absence or inefficiency of the ambulance services system.

A lot has been said about improving conditions at our hospitals but the reality in Ghana today is that several of our compatriots who trudge an odd mile or more in order to access a public health facility are through no fault of theirs forced to go through bouts of stress and irreverence from health care professionals who are been paid by our tax money to deliver excellent services.

I am forced to return to the issue of health care delivery in this country because in spite of several interventions initiated to inject efficiency into the system many of our compatriots are still dying needlessly.

There are hundreds of stories of pregnant women who never return from the delivery rooms or theatres. In some cases both mother and baby die and in other cases either of the two survive or die. Our reaction in these circumstances is to collect the data and use same to solicit for donor assistance and intervention.

Where is our collective responsibility as a sovereign nation? Don't we have a duty to save our mothers from an uncertain fate in the name of child bearing?

We are losing our mothers, wives, daughters and sisters daily to pregnancy and child birth issues. According to Professor Agyemang Badu Akosa, one of the major causes of maternal mortality is anaemia.

In previous media interviews, the former Chief Pathologist at the Korle bu Teaching Hospital has insisted that there was a rise in the cases of anaemia in pregnant cases in Ghana as well as in other countries in the developing world.

Many of these severely anaemic women are in this condition because they are poor and therefore cannot afford food and medicine with the basic nutrients or supplements necessary to prepare them for both the pre and post-natal periods.

The Director of Ghana's Ambulance Service who runs a pool of about 1000 ambulances for a population of 24 million has taken to the airwaves to ask for the establishment of trauma centers across the country among other equally important interventions to support a holistic ambulance services system in this country.

Trauma injuries include falls, auto accidents, gunshots, stabbings, burns etc. A trauma center opens a 24 hour a day, 7 days in a week policy and has a trauma surgery specialized team to attend to traumatic injury situations.

If these patients are to survive, a lot would depend on the trauma center to which they are evacuated. Similarly the level of a patient's survivability depends on the speed of their evacuation.

Ghana's largest and pre-eminent referral center is the Korlebu Teaching Hospital. Korle bu is not a trauma center even though it offers emergency services. The emergency room in Korlebu is not designed to offer the same facilities as a trauma center is equipped to provide.

For example if you were unfortunate to have suffered machete injuries during an armed robbery, chances are that you would be ferried to Korle bu in the back of a taxi, a private vehicle or a KIA Truck. Sadly that is the case of many citizens of this country. It is more of a rarity for people at an accident scene to call an ambulance.

Rather they would dump both the injured and the dying into the next available open back truck or commercial vehicle and send them to the hospital.

Once you get to Korle bu the doctors and nurses would have to scramble resources to save you. They are forced to react to your emergency because between the time of the attack or accident and the time you reached the hospital there was no communication between the emergency room and the vehicle that was ferrying you to the hospital.

If an ambulance had ferried you to the emergency room, chances are that they would communicate your status to the medical team at the hospital even before they receive you at the facility.

I have heard the Director of the National Ambulance Authority complain severally on various media platforms that on occasions where ambulances had responded to an emergency and they had phoned ahead to Korle bu and other referral hospitals in the cities for beds to be prepared for dying or severely injured patients, they had been met by the popular refrain; 'Take them elsewhere…there are no beds here.' In the 21st century this is an outrage.

And this has become a pattern in Ghana where millions of dollars is lost through dubious judgment debt scandals. The Create, Loot and Share (CLS) brigade have misapplied several million Ghana Cedis in the name of the Ghana Youth Entrepreneurial Empowerment Development Agency (GYEEDA) and if the President is to be believed the last has not been heard about the case.

Well, as the chief custodian of the public purse we don't expect anything less from President Mahama. Our President has to make sure that every cent of our money lost through official collusion and other acts of corruption in the name of GYEEDA, SADA or any other contrivance is returned to the national chess as soon as possible.

Fighting corruption is judged by deeds and not merely by political statements and rhetoric. The heart of those of us in the anti-corruption community was gladdened when President Mahama set up the Presidential task force to rein in the activities of illegal miners and tax evaders at our ports.

Unfortunately in the high stakes game of conquest politics as practiced in Ghana the words of the President cannot be enough. It might carry some punch but until it is matched with decisive and tangible action nothing much can be done.

Health care delivery in this country is in stress mode. Admittedly a lot is being done to create more access for patients in rural communities through the Community-based Health Planning and Services (CHPS) concept and it is a masterstroke that must be applauded.

This CHPS concept was hatched upon the realization that 70 per cent of Ghanaians lived over 8 kilometers from the nearest health care provider a situation that was exacerbated by the poor road network and lack of ambulance services.

However our quest to develop a comprehensive, sustainable and a holistic health care delivery system in Ghana is imperiled by the political elite's lack of commitment to arrest corruption in the body politic.

I agree that this can only be possible if we all pulled in the same direction by not hesitating to name and shame those in our profession, churches, communities' et al who are found culpable.

But the greatest responsibility lies with the leadership of this country. As leaders, they set the agenda and the pace for decency for all of us to emulate. If they find it difficult to declare their assets as mandated by the constitution and even deem our right to know the source of their wealth as intrusion then not much can be done to fight sleaze in public office.

If the political elite do not see the urgency to pass the Right to Information bill into law why do they think they can mount the moral high ground to pontificate about ridding corruption from the body politic. Reporting corruption thrives on data and information.

If the major piece of legislation that would give the media untrammeled access to public information that has been filed away under the cloak of official secrecy is been 'filibustered' as it were we can safely conclude that this administration is not genuinely committed to fighting corruption?

Meantime, health emergencies are surging already and as predicted they are bound to get a lot more complex especially in light of the oil industry and its attendant challenges.

This in addition to the dynamics of our new status as a middle income country has placed an extra burden on us to get to the part of the work of building the requisite infrastructure to match expectations and to get our health care delivery system in good shape. The best is what is good for the Ghanaian.

However unless we work together to make corruption an unrewarding enterprise nothing good would happen in this country.

Money that is dissipated wantonly as we have witnessed through scandalous judgment debt payments, the Subha mess and the Gyeeda outrage could have been ploughed back into creating a first class health care delivery system in Ghana thereby making our country a haven for health tourism and contributing to our GDP.

Remember that there would always be consequences for work left undone. The lessons are in a history book near you. God bless our dear nation Ghana.

*The Writer is a freelance journalist, an author and the Executive Director of the Center for Investigative Reporting Ghana (CIRGHA). ([email protected])