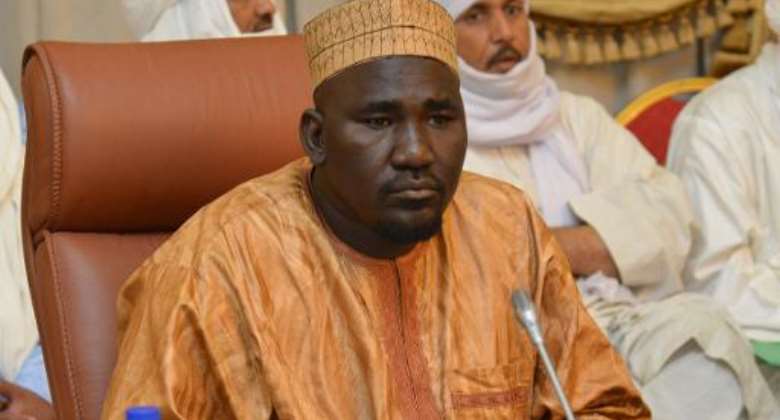 Vice-President of the National Movement for the Liberation of Azawad (MNLA) Mahamadou Djeri Maiga at a meeting on the Malian crisis in Ouagadougou on June 7, 2013. By Ahmed Ouoba (AFP/File)

Ouagadougou (AFP) - The ethnic Tuareg rebellion announced Friday it would return to war against Mali's army after it said one person was killed and five others injured in clashes with soldiers at an airport.

"What happened (on Thursday) is a declaration of war. We will deliver this war," said Mahamadou Djeri Maiga, vice-president of the MNLA, or the National Movement for the Liberation of Azawad.

"Wherever we find the Malian army we will launch the assault against them. It will be automatic. The warnings are over," Maiga said.

Protesters said Malian soldiers shot at "women and children who were demonstrating peacefully."

The Tuareg rebels said one person was killed, while three women and two children were injured. One of the women is in a serious condition.

The Malian government however said its troops, "taken to task by uncontrollable elements," fired warning shots after they had been shot at and hit with stones.

After 18 months of a political and military crisis the rebels and Malian government signed a peace deal in June.

The June accord, signed in Burkina Faso's capital Ouagadougou, opened the way for voting in Kidal along with the rest of the turbulent west African country in two rounds of a presidential election in July and August.

Up until the agreement, the MNLA -- whose ultimate goal is the independence of Azawad, the Tuaregs' name for their homeland in northern Mali -- had refused to allow any government soldiers or civil servants into the desert town.

In January 2012, the MNLA launched an insurgency to take control of the north. A subsequent coup in the Malian capital Bamako led to chaos, and armed Islamist extremists linked to Al-Qaeda overpowered the Tuaregs and seized control of north Mali.

A French-led military operation launched in January ousted the extremists, but sporadic attacks have continued and the Tuareg demand for autonomy has not been resolved.

Latest Photo Reports
Catch up with all the political quotes from our politicians.
Advertise here
More from Mali
ModernGhana Links
France accused of failing to monitor NGO who 'stole children' in Mali
Mali junta hits out at critical rights report
Civilians flee as jihadists advance in northeast Mali
TOP STORIES