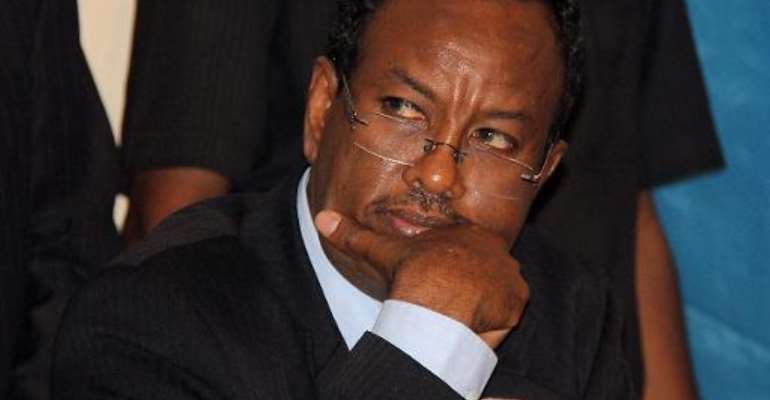 Prime Minister Abdi Farah Shirdon, who has been in office for just over a year, is facing a confidence vote in parliament this week after he resisted President Hassan Sheikh Mohamud's demand that he resign.

The precise cause of the power struggle is unclear, but politicians have pointed to wrangling over alleged corruption, personal loyalties as well as Somalia's complex clan politics, where each community expects to be represented in the corridors of power.

"The prime minister told us he is at loggerheads with the president over several issues including who should be in cabinet," said MP Mohamed Yusuf.

The government, which took power in August 2012, was the first to be given global recognition since the collapse of the hardline regime in 1991, and billions in foreign aid has since been poured in.

But fighting over who gets what job appears to have become the number-one priority in a badly fractured country desperately in need of a strong central government and struggling to cast of its image as a failed state.

The political squabbling follows the resignation earlier this month of central bank governor Yussur Abrar -- the second to step down during this government -- complaining she had been pressurised to sign off on corrupt deals, claims the government denied.

Her predecessor, Abdusalam Omer, resigned his post in September amid accusations by United Nations experts the bank had become a "slush fund" for political leaders with millions of dollars siphoned out, claims that were dismissed by the government.

Sources close to the office of the prime minister claimed the president had barred all central bank signatories -- including Shirdon -- from withdrawing cash amid widespread allegations of graft.

"International backers are still behind the government because it is effectively the only option, and they do provide a chance to continue the push back against Al-Shebab," said a Western official.

The Western official said the optimism that greeted the appointment of the new government is now "being tempered with reality".

"It is worrying, since they appear more and more to be following the example of their TFG (Transitional Federal Government) predecessors," the official said.

During the TFG's eight years in power, progress was stalled by political infighting -- with loyalties often aligned along clan lines and development frozen by rampant corruption.

Behind the scenes diplomacy

Mogadishu's government, selected in a UN-backed process in August 2012, was hailed as offering the best chance for peace in a generation.

British Prime Minister David Cameron, speaking in May, said then that the steps forward had "exceeded all expectations".

But Shebab insurgents, breakaway regions, rival clans and rampant insecurity have conspired to ensure the Horn of Africa nation remains saddled with its basket case image.

Sources close to Shirdon say the latest power struggle broke out between the president and the prime minister in September following a proposed cabinet reshuffle, with Mohamud apparently furious after Shirdon wanted to sack three of his key allies including the powerful interior minister.

Mohamud demanded Shirdon resign but the prime minster has refused.

"The president won his position by election, while the prime minister was nominated by the president," said MP Abdirahman Hosh Jibril.

"The decision of the president did not come overnight, we have been asking for change for a long time... the prime minister can still refuse to resign but he should come in front of the parliament."

Behind-the-scenes efforts by foreign diplomats to broker a deal between the two have so far proved fruitless, and a majority of lawmakers now appear to back the president's bid to sack the prime minster, but others fiercely oppose it as unconstitutional.

Shirdon earlier this month confirmed a "rift" with the president, but claimed the argument was related to "constitutional issues not political", in a statement urging citizens to have "confidence in their leaders and lawmakers... to solve the misunderstanding".

Parliament speaker Mohamed Osman Jawari has also tried to play down the rift.

"Lawmakers must not exaggerate the issue of the rift between the president and the prime minister," he told reporters. "All issues must be brought to parliament for discussion before rushing to decisions."

But without resolution, political divisions could impact efforts to battle Shebab rebels.

The African Union force that fights alongside government troops is awaiting reinforcements to boost it to some 22,000 soldiers, which is expected to kickstart a long-expected fresh offensive.