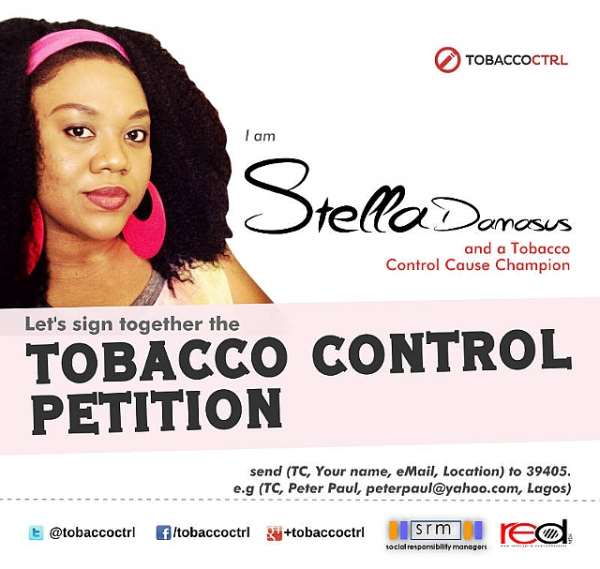 More than 600,000 who die annually from tobacco related diseases are non-smokers exposed to second-hand smoke. The world's leading preventable cause of death claiming the lives of 6 million people each is tobacco use which is a slow, but more often than not, sure killer.

Several efforts have been made since 2012 in this current administration particularly by the President to get a Tobacco Control bill passed. Most significant is the setup of a three-man ministerial team led by the Hon. Minister of Health and charged with the task of drafting an executive bill.

However, despite public utterances in May & July 2013 both by the President and the Hon. Minister of

Health, Prof. Onyebuchi Chukwu assuring on the importance of making Nigeria smoke-free and reducing the smoking prevalence in the country, there is still no law to this effect.

(FCTC), to which Nigeria is a signatory. As part of the project, we have launched an online petition to encourage the Honourable Health Minister, Prof. Onyebuchi Chukwu in his commitment and quest to pass the comprehensive Tobacco Control for Legislature in Nigeria. The petition can be signed on

The TobaccoCtrl petition is in conjunction with Social Responsibility Manager

For more information about this campaign project, please visit

2go: Tobaccoctrl
If you would like more information about the Tobacco Control Nigeria campaign; please send an email to [email protected] or visit http://www.tobaccoctrl.ng .

About Tobacco Control Nigeria
Tobacco Control Nigeria (Tobaccoctrl) is a policy change and public health campaign project using Social Media to advance tobacco control and support the passage of a comprehensive Tobacco Control (TC) law compliant with the World Health Organization's Framework Convention on Tobacco Control (FCTC). The campaign is to raise awareness of the various health risks of smoking and second hand smoke, as well as the toll of tobacco se on the Nigerian population. It also aims to encourage online and mobile followers to express their wish for a healthy environment enabled by effective TC policies for themselves, their families, and their communities.