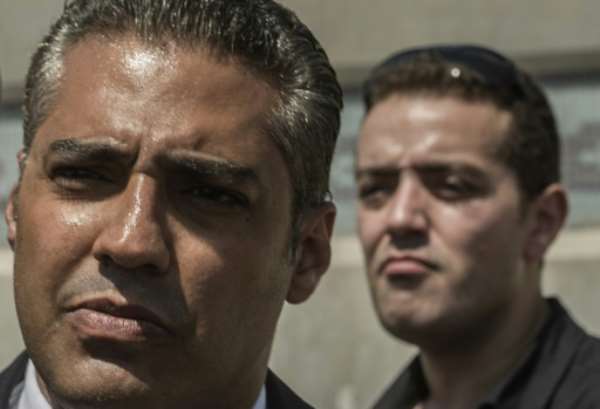 Cairo (AFP) - An Egyptian court sentenced three Al-Jazeera reporters to three years in prison on Saturday, in a shock ruling following global demands for their acquittal.

Canadian Mohamed Fahmy and Egyptian producer Baher Mohamed were present in court. Australian journalist Peter Greste was tried in absentia after his deportation early this year.

At least three other co-defendants, accused of working with Al-Jazeera, received similar sentences.

Qatar-based Al-Jazeera denounced the verdict against the trio, who were accused of broadcasting false news, as a "deliberate attack on press freedom".

Their retrial was ordered after an appeals court overturned an initial sentence of seven years in prison, saying the prosecution had presented scant evidence against them.

"The only fair outcome of this trial is an acquittal," Amal Clooney, the human rights lawyer representing Fahmy, said after the verdict.

"There was no evidence and even the Egyptian high court said so," she told reporters in the court room.

Relatives and supporters in the court were dismayed by the verdict.

"I'm shocked. Terribly shocked. We waited for an acquittal and then found ourselves stuck again in the case. This is illogical," Fahmy's brother Adel said.

The journalists were arrested in December 2013, months after the military overthrew Islamist president Mohamed Morsi and launched a deadly crackdown on his supporters.

At the time, Qatar, which owns Al-Jazeera, was supportive of Morsi and his Muslim Brotherhood movement.

On Saturday judge Hassan Farid said it was clear to the court that the reporters "were not journalists" and had broadcast "false news" while operating in Egypt without a permit.

Fahmy and Mohamed, who had been released on bail in February at the start of the retrial, were taken into custody.

The trial has become an embarrassment for President Abdel Fattah al-Sisi, the then army chief who ousted Morsi from the presidency in 2013.

Washington and the United Nations had called for the journalists' release, and their trial was seen as damaging to the country's international standing.

The New York-based Committee to Protect Journalists said at least 18 reporters are imprisoned in Egypt.

Sisi has said he wished that the Al-Jazeera journalists had not been put on trial. He may pardon them if he chooses.

Fahmy, who gave up his Egyptian citizenship in hopes of being deported as Greste was early this year, had said he looked forward to finally seeing justice and winning an acquittal on the eve of the trial.

"From day one it's a politicised trial. If justice is to be served we should be acquitted as impartial journalists," said Fahmy, who formerly worked for CNN, on the eve of the session.

Fahmy and Greste were arrested at a Cairo hotel where they had a makeshift studio in December 2013, six months after Morsi's overthrow. Mohamed was picked up at his home.

The three were accused of having supported the Brotherhood in their coverage. However, during the trial, the prosecution failed to find fault in their reporting.

"The technical committee that was appointed by the judge gave the court a report stating that none of our reports were fabricated," Fahmy said.

Al-Jazeera's Arabic channel had been supportive of Morsi and Islamists, but Fahmy, Greste and Mohamed worked for its English-language news channel.

Fahmy says they discovered that the broadcaster was unlicenced during their trial, when a prosecutor presented evidence to that effect.

"We were shocked when the prosecutor gave this document; we didn't know this," Fahmy said.