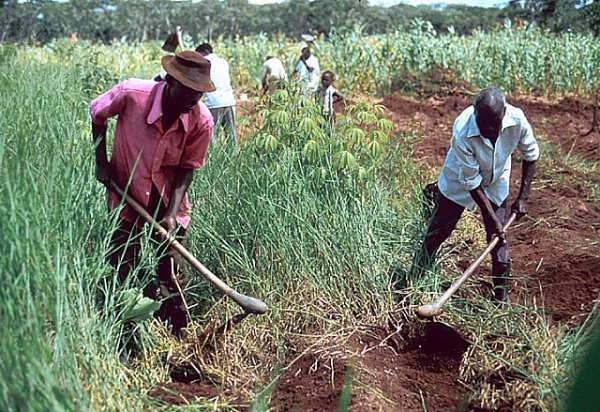 The conference also saw the launch of the “AGRA Markets Book”, which according to Mr. Fadel Ndiame, the Lead Coordinator of Farmer Organization Support Center in Africa (FOSCA), is to celebrate the good work of African Small-holder farmers.

The conference was put together by the Africa Green Revolution (AGRA) and the African Investment Climate Research (AFRICRES), and drawn participants from African countries including Ghana, Malawi, Kenya, Tanzania, Rwanda, and Mozambique.

He said such a move would enhance the flow of information to make agriculture sustainable, thereby increasing productivity, and providing a good income for the farmers.

“Nobody would like to join in an organization which does not yield importance or the intended purpose. Therefore, it is important that we take up these measures to ensure that the small-holder farmers make money,” Mr. Ndiame stressed.

He further announced that an award ceremony will be held on the 28th November to honour the small-holder farmers in categories including: the marketing more, earning more and producing more.

Speaking on the case of Ghana in the quest for strengthening FOs in Africa, Professor Offei of the University of Ghana disclosed that Farmer Based Organizations (FBOs) have existed in Ghana in various forms for decades, and have been supported by different governments and NGOs.

He said the Agricultural sector in Ghana plays a crucial role in reducing poverty and achieving economic growth, with about 60% of the population relying on agriculture for their livelihood; stating however that, as in the case of other developing countries, agriculture is predominantly undertaken by small-holders who produce crops using traditional methods and low resource technologies and with only 18% of the farm holdings are more than 4.0 hectares per farmer.

Prof. Offei stated therefore that there was the relevance of small-holder farmers and hence the crucial role played by FOs in the traditional agricultural systems.

He noted however that, despite the realization that FBOs hold promise for moving Ghana's agricultural sector forward, including improving agricultural output and employment, there is limited evidence on their characteristics, activities, and performance, making the sector seems less vibrant than expected.

He continued that the FBOs are often motivated by subsidies and incentives offered by government or donor agencies which turns to undermine focus on their core activities.

“Many farmer organizations go through a high activity phase and later become inactive or defunct over a period of time…some have failed because of corruption, mismanagement, conflict, and lack of clear goals,” Prof Offei emphasized.

He called for the enhancement of FBOs to be made more effective through lobbying, articulation of their position on an agricultural policy and development for strategies favourable to their members notably small-holders and women farmers.

Taking participants through a research on profiling of FOs and Service Providers (SP), conducted in five African countries – Ghana, Tanzania, Kenya, Malawi and Mozambique, by Mr. Sephooko Motelle, it was revealed that Ghana attains 44% of income from agricultural production while Kenya tops the chart with 64%, followed by Tanzania and Malawi with 53% and Mozambique following with 46%.

At the professional capacity, it was shown that Ghana falls at 63%, being second on the chat after Kenya with 66%. It appeared that there are diversified executive committees in Ghana and most FOs executives receive training in basic business management, unlike in other developing countries.

The chart indicated that there was more marketing in Ghana but with low advocacy for the small-holding farmers.