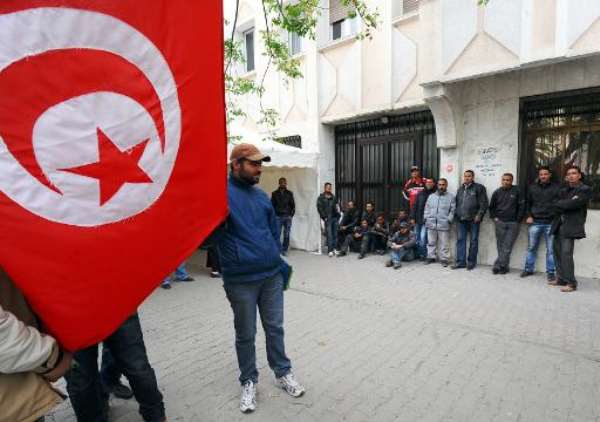 Gafsa (Tunisia) (AFP) - Angry protesters set fire Wednesday to the office of Tunisia's ruling Islamist party in the neglected Gafsa region, as strikes were observed in areas amid rising discontent and political deadlock.

Hundreds of demonstrators attacked the Ennahda party's headquarters in the poor central region after trying to break into the governor's office, where they were dispersed by police firing tear gas.

The protesters seized files and furniture from the office and burned them on the road, while preventing firemen from gaining access to the building, and with no immediate sign of the police.

"The people want the fall of the regime," and "The people of Gafsa are a free people," were among the slogans chanted.

As in the other regions of Gabes and Siliana, Gafsa ground to a halt Wednesday as a general strike was called to protest against poverty and lack of development.

Those were driving factors behind the popular uprising nearly three years ago that toppled former strongman Zine El Abidine Ben Ali, and which continue to plague much of Tunisia, whose sluggish economic recovery has failed to create jobs or spur regional development.

A number of similar protests have resulted in regional offices of Ennahda being attacked, including last month in the towns of Beja and Kef.

Gafsa is a key strategic area because of its phosphate mines but remains among the poorest in Tunisia despite its natural wealth, and witnessed anti-government protests in 2008, under Ben Ali, that were savagely repressed.

Since the revolution, production has slumped because of disruptions caused by strikes and protests, and despite thousands of people being hired in the state-run sector as part of government efforts to defuse social tensions.

The catalyst for the industrial action in Gafsa and Gabes was the government's decision not to include it in the list of regions where five new university-linked hospitals are to be built.

The local branch of the UGTT workers union held the decision up as an example of the government's unequal treatment of different regions, another grievance that motivated the uprising three years ago.

In Gabes, most public offices and businesses were closed in response to the UGTT's call to strike, and a large protest was held in the early afternoon, with no incidents reported.

In Siliana, a region southwest of Tunis, the strike was called to commemorate the police repression of anti-government protests one year ago.

Some 300 people were injured then, mostly by birdshot, when demonstrations exploded into days of running clashes between police and protesters.

Hundreds gathered on Wednesday outside the governor's office to remember the victims, hurling rocks at the police, who did not respond, according to an AFP photographer.

"The people injured by birdshot were victims of the government, which is dragging its feet," said Ahmed Chefai, the deputy leader of the UGTT's local branch.

"The government has not stuck by its commitments contained in the December 2012 agreement, which called for the state to take care of the injured and provide for their physical and material needs," he added.

Siliana ranks 18th out of the country's 24 provinces in terms of development, according to the UGTT, and has yet to see the public investment promised in the wake of the unrest.

Strikes have multiplied across Tunisia in recent weeks, with political deadlock, the lack of functioning state institutions and a rise in attacks by Islamist militants adding to the social discontent.

Tunisia was plunged into political crisis in July with the killing of opposition leader Mohamed Brahmi by suspected jihadists, triggering calls for the resignation of the Ennahda-led coalition government.

Under an ambitious roadmap brokered by mediators last month, the Islamist party and the opposition pledged to negotiate an interim government of independents. But the talks were suspended shortly afterwards with the two sides unable to agree on a future prime minister.