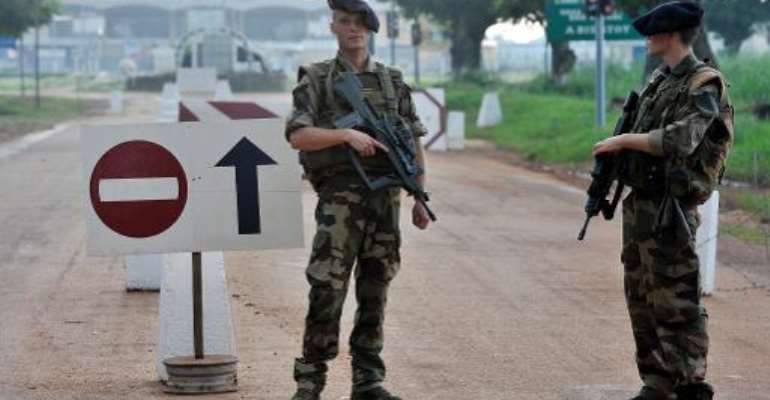 French soldiers stand guard at a checkpoint near Bangui Airport on October 10, 2013. By Issouf Sanogo (AFP/File)

It has been the talk of Bangui for weeks: why have 400 French troops already stationed at the capital's airport not been deployed to put a stop to rebel groups spreading terror across the nation?

Central Africans got their answer on Tuesday when France said it would deploy about 1,000 soldiers to take on an active fighting role alongside a flagging African-led "stabilisation mission", as long as the United Nations Security Council agreed to the move.

"France should have intervened a long time ago to stop this downward spiral," said Martin Baba, former president of the country's economic and social council. "The country has never known such a prolonged period of instability and violence."

Reports have described a litany of horrors in the landlocked, sprawling country, with security forces and militia gangs torturing villagers, carrying out public execution-style killings and perpetrating widespread rapes.

Defence Minister Jean-Yves Le Drian said France has proposed a UN resolution that would authorise international troops to use force in its former colony, a piece of diplomatic wrangling requiring Security Council signoff that has perplexed residents who believe their presence is already overdue.

Computer technician Prince Saturnin Goulam told AFP in Bangui on Tuesday "they should have been there all along, to rid the country of this horde of criminals who have gone too far."

The UN estimates that at least 400,000 people, or 10 percent of the population, have been forced from their homes by the crisis.

Against this backdrop, sending more French soldiers "can only bring relief," said Jude Zosse, editor of the L'hirondelle newspaper.

'We are barely alive'

A power vaccum yawned open in March in the mineral-rich Central African Republic after a rebel movement known as the Seleka coalition ousted the former president, Francois Bozize.

The rebels' leader, Michel Djotodia, installed himself as the country's first Muslim president and later disbanded the group, but has failed to keep his former comrades under control.

Militia groups have also appeared to protect Christian communities, which make up about 80 percent of the population, threatening to inflame religious tensions, with France and the United States even warning of a future genocide.

"The security situation of the country has forced our allies to act, headed up by France, to avoid the worst," said Enoch Derant Lakoue, a former prime minister and holder of several ministerial posts in the past.

Lakoue had high hopes for any eventual mission. "France will know how to restore order and bring hope to the Central African people," he said.

For Jean-Marie Mabale Ndangue, a Bangui trader, it was time for the former colonial master to "take responsibility."

Ndangue said that without action Central Africans would be left "barely alive, totally in chaos, and with nothing to suggest the abuse will stop without a French intervention."

France's resolution aims to strengthen an African stabilisation force in the country as a first step toward turning it into a formal UN peacekeeping mission.

The African force currently has about 2,500 troops but has been hampered by a lack of funds, arms and training, problems the mooted French mission would hope to reverse before the force is beefed up when it is taken over by the African Union in December.

But there was a voice of dissent among the enthusiasts for the sound of French boots marching down Bangui's streets once again.

"I'm a doubting Thomas," said Thierry Badia, a resident in the capital. "I need to see things at work... it is just too early to say."