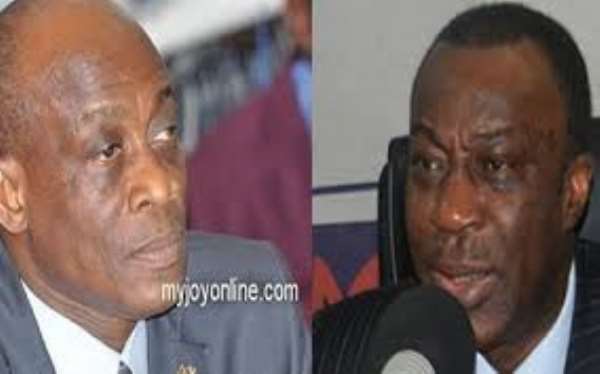 Parliament yesterday commenced discussions on the 2014 Financial Policy of the Government, amidst heated debate that saw the minority criticizing the brains behind the budget, for lacking clear-cut initiatives to move the country forward.

Ranking Member on the Finance Committee, Dr. Anthony Akoto Osei, who led the minority to discuss the budget, after seconding the motion moved by the Chairman of the Finance Committee, Hon. James Klutse Avedzi, said the voluntary 10% salary cut by members of the Executive and other government appointees was a misplaced priority.

He, instead, urged members of the Executive and government appointees to pay for their utilities (water and electricity bills) since that would ease the government from absorbing the huge amount of money it uses to finance these bills.

'Everybody in this country knows that members of the Executive and other government appointees do not pay for their utilities. Every other Ghanaian pays for this. So, if the President wants to do a symbolism, I am offering him this suggestion, that cutting their salaries by 10% is nothing.

'They have not done anything to deserve this punishment. Increase the salary by the amount that you negotiated with labour - but direct them that from today anybody that gets free utility must begin to pay for it,' he noted.

According to the Old Tafo legislator, with such directive, members of the Executive and other government appointees would begin to feel the hardship they have imposed on Ghanaians as a result of the increase in utility tariffs.

The President, John Dramani Mahama, through his Minister of Finance, Seth Terkper, a week ago (November 19, 2013), announced in the 2014 Budget Statement that the members of the Executive and other government appointees have voluntarily decided to take a 10% cut in their salary for the next twelve months, with the proceed going into a fund to finance various CHPS compound projects across the country.

Ayariga's intervention
But the Minister of Information and Media Relations, and MP for Bawku Central, Mahama Ayariga, on a Point of Order, argued that Dr. Akoto Osei was misleading the House, since the advice he was providing to the President had long been passed on to members of the Executive and other government appointees.

That notwithstanding, he said, ever since he was appointed as a deputy minister, and now a minister, he had been paying his own utility bills and, therefore, debunked Dr. Akoto's assertion that all government appointees were enjoying free utility services.

Missed targets
Commenting further, Dr. Akoto Osei said the country in 2013 missed all the macroeconomic targets it set for itself, a situation he argued was an indication that all was not well with the economy.

According to him, the 2014 budget statement presented by the Finance Minister was an acceptance of the difficult task confronting the country and described the situation as a hangover from the excessive overspending in 2012.

'The chickens have come home to roost and we must all face the reality and deal with it,' he said. He added that the government again missed all the revenue targets in 2013, another situation he noted, was more worrying.

'For the period from January to September, if you calculate the tax in the GDP ratio - you get a ratio of 12 percent. With this performance, the government is projecting that by the end of the year, the tax ratio will move to 18 percent.

'Mr. Speaker, if in nine months you have 12 percent, you are telling me that in three months you are going to improve it by 50 percent?

'It is only a miracle. It will not happen. From 2009 till date, revenue has always been overestimated - this is not good for the country. It is poor forecasting,' he noted.

He added: 'If you missed all these revenue targets and the Ministry of Finance tells us that they have paid GH ¢ 75million to a company which was supposed to assist in revenue collection, but did not do their job, then you begin to worry.

'It is frightening. If your technical people are not collecting, then they are being directed to pay money for somebody to assist those who are not doing anything. This is a case of financial malfeasance.'

He urged the Minister of Finance to seriously delve into the matter and report to the House with his findings.

Mr. Akoto Osei also debunked the assertion by the Ministry of Finance that the country's wage tax ratio was over 70%.

However, Mr. Terkper on point of order said the 70% was as at 2012 and included two years arrears. His intervention drew lots of boos from the minority members.

Problem based budget
The MP for New Juabeng, Dr. Mark Assibey-Yeboah termed the budget as 'Problem Based Budget.'

In his view, the budget presents problems for all segments the population, since households would have to grapple with the double digit inflation which stood at 13.1% at the end of October, 2013.

'This means a reduction in households' purchasing power' and urged the government to put in measures that would forestall the weakening of the currency and the huge domestic borrowing.

For businesses, Dr. Assibey-Yeboah argued that aside being confronted with the unavailability of credit, there is also the issue of persistent high interest rates and the increment in taxes on all manner of goods.

Public debt
He bemoaned the repercussions the budget would have on the 24million Ghanaian population since the public debt had ballooned to GH¢49,345,800,000.

'The government itself has come out to say that there will be a limit on new loans. Is it an admission of the worsening of our books? The GH¢49,345,800,000 translate to a debt per capita of GH¢2,056. Every Member of Parliament owes 20 million old cedis of the debt,' he stressed.

But their argument was equally met by the majority members. The MP for Ketu North, Hon. Klutse Avedzi, on his part outlined the various intervention measures the government had put in place to make the economy stronger than before.

He said though inflation figure for October2013 was 13.1% as a result of the effect of fuel and utility price increases and demand pressures, he was optimistic that the situation would not be the same for the ensuing year since the end year inflation target of 9.5% was achievable.

With regards to public debt, he said the internationally accepted Debt/GDP ratio was 60% and argued that the country was far below that level.

'I think that it is better for government to borrow to provide for its citizens and pay for it later, than to wait for the people to suffer for fear of borrowing simply because of Debt/GDP ratio'.