Ghanaian innovator to introduce vehicle that uses no fuel, no oil, no water 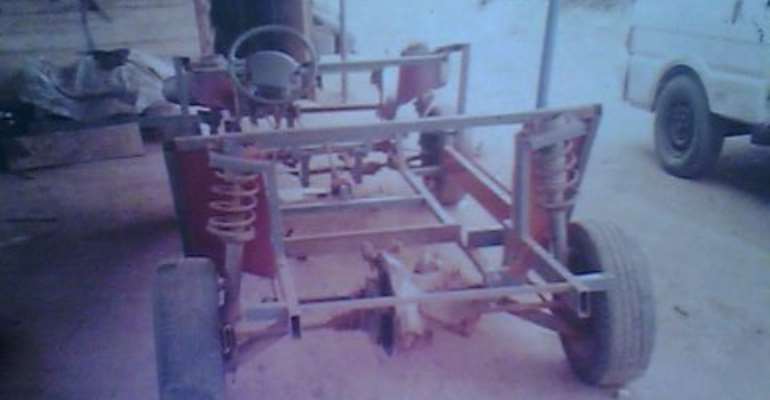 A Ghanaian innovator with the Suame Magazine Industrial Development Organization (SMIDO) is on the verge of a major historic breakthrough in automobile engineering.

Samuel Ampiah will be pushing the frontiers of the current global automobile engineering standards, when he unveils a new vehicle dubbed: SMATI Magnetic A by the first quarter of 2014.

The SMATI Magnetic A is a new global prototype vehicle under the trademark inscription of N-FOW, indicating a vehicle that uses No Fuel, Oil and Water.

According to Samuel Ampiah, who is leading expertise in the design of the current prototype, the SMATI Magnetic A is powered with direct current ranging from 12 volts to 60 volts energy.

“It is brushless induction motor with an alternator, transformers, output transistors, transmission gears and chargers, and has an effective charging system as it is driven, and has no limit to the distance that it can travel, so long as it is moving recharging is effective. It has speed ranging from 160 km/ph to 300 kilometers per hour either manual or automatic driven,” he explained.

The global automobile industry is moving towards fuel cell-powered vehicles – investing in the technology that uses hydrogen to generate electricity to power the engine and the waste products are heat and water. One of the main reasons is that it is emission-free.

The SMATI Magnetic brand of vehicles would therefore become the hallmark of Ghana and Africa in contributing to a new global revolution in the automobile industry.

Consultant to SMIDO, Nyaaba-Aweeba Azongo, says the SMATI Magnetic A is being designed to be the world's most environmentally-friendly automobile that does not use fuel, oil and water for cooling, no carbon emissions and has virtually very little maintenance, which will save users some money.

According to him, the SMATI Magnetic A prototype is about 80% complete, and would be formally unveiled for the Ghanaian and global audience early next year.

The current prototype is a saloon car fitted with the SMATI Magnetic Drive which is a product of indigenous technology.

“Once completed, no fuel would be required to move the vehicle even if it is being driven from Ghana to Europe on land. It charges automatically upon movement and one requires the 1st 30km/hr to charge the battery which then automatically switches to the alternator. One can also plug it to electricity to charge,” stated Azongo.

Samuel Ampiah is confident the vehicle will be in high demands because “apart from being affordable, the cost of maintenance is also virtually zero; it has all the requirements that the international community is looking forward to.”

Early this year, SMIDO unveiled the prototype SMATI Turtle vehicle, which is currently being exhibited in the Netherlands to attract global investors.

Mr. Azongo intimated that “shipping the new innovation to Europe would amount to mortgaging our collective conscience as a nation”.

He indicated that the vehicle would rather have to be considered on its own merit in Ghana, registered and certified to be used on the Ghanaian soil and investment pulled domestically to ensure mass commercial production in Ghana.

The Suame Magazine Industrial Development Fund (SMID Fund) is currently supporting the SMATI Magnetic incubation to ensure the successful completion of the vehicle by the first quarter of next year.

President of SMIDO, Sarpong Boateng, who doubles as Chairman of the Mechanical Association of Suame Magazine, has hailed the breakthrough as a great revolution to deepen respect for artisan engineers as change agents in the wheels of nation development.

He has called on government to get actively involved in the successful outcome of this major global revolution from Ghana to showcase the Ghanaian ingenuity as a global brand and the prospects of Ghana's socio-economic development.

Aside fighting officials fighting corruption, tell me what A...
7 hours ago