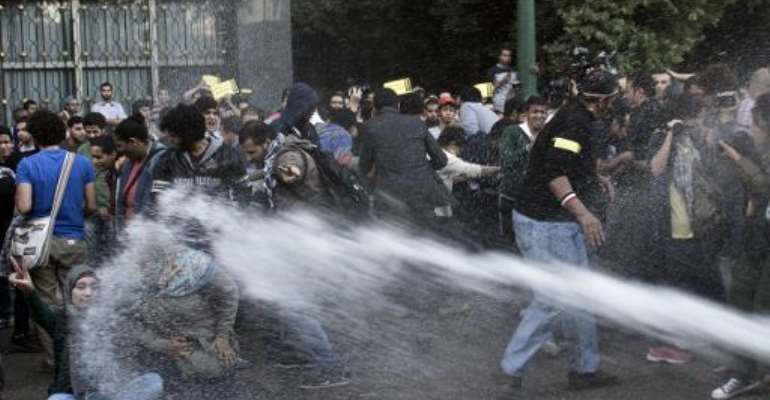 Egyptian policemen use a water canon to disperse protesters during a demonstration organized by the group "No Military Trials for Civilians" in front of the Shura council in downtown Cairo on November 26, 2013. By Khaled Desouki (AFP)

Hoda El-Sadda, a senior member of the 50-member panel, told AFP she and nine others had "suspended work after the arrest of protesters".

As a result, the panel suspended its work for the day, but adjourned its session to Wednesday morning, television reports said.

Egyptian police arrested about 30 protesters among dozens demonstrating in Cairo against an article in the revised basic law that allows the military to try civilians in certain cases, a security official said.

The action was taken because the demonstration was unauthorised, officials said, referring to a disputed new protest law enacted at the weekend which requires protest organisers to give three days' written notice to authorities.

On Tuesday, protesters were demonstrating in front of the Shura Council, where the constitution panel sits, when police used water cannon to disperse them and later made arrests.

Among those arrested were Mona Seif, founder of a campaign against military trials of civilians, and Ahmad Harara, a dentist who lost his eyes to birdshot during protests against Hosni Mubarak in 2011 and against the military junta that ruled Egypt immediately after Mubarak's fall.

Another panel member, Khaled Youssef, also criticised authorities for arresting the protesters as he suspended his work on the committee.

"What is happening is threatening the future of our country because this committee of 50 faces risk of exploding. This committee is the cornerstone of the road map," Youssef said on state television, referring to the transitional plan outlined by Egypt's interim rulers after they came to power following the overthrow of Islamist president Mohamed Morsi.

The road map envisages that a new constitution, a new parliament and a new president should be in place by the summer of 2014.

"This won't stop the protest", said Alaa Abdel Fattah, a prominent activist and brother of Seif.

"They used water cannon and then started beating and arresting people," he told AFP.

"The law must be repealed," said Ahmed Maher, founder of the April 6 movement that spearheaded the 2011 revolt that toppled Mubarak.

"The interior ministry does not want any protests," he said, adding that "even under Mubarak we could hold protests".

Police also used water cannon to disperse another protest in Cairo where demonstrators were demanding the prosecution of those responsible for the deaths of demonstrators in November 2011 when opponents of the then military junta clashed with police in the capital.

Amnesty International said the new protest law was a "serious setback that poses a grave threat to freedom of assembly and gives security forces a free rein to use excessive force, including lethal, against demonstrators".

The Islamist Freedom and Justice Party, the political arm of the banned Muslim Brotherhood, also condemned the law.

It said that "instead of stopping the security forces' repressive and murderous practices, (the law) entrenches brutality and abuse".

Egypt's military-installed authorities are engaged in a brutal crackdown since August 14 on Islamist supporters of Morsi, the country's first democratically elected leader.

He was overthrown on July 3 after mass street protests against his turbulent single year of rule.

Since then, more than 1,000 pro-Morsi protesters have been killed and thousands more arrested.