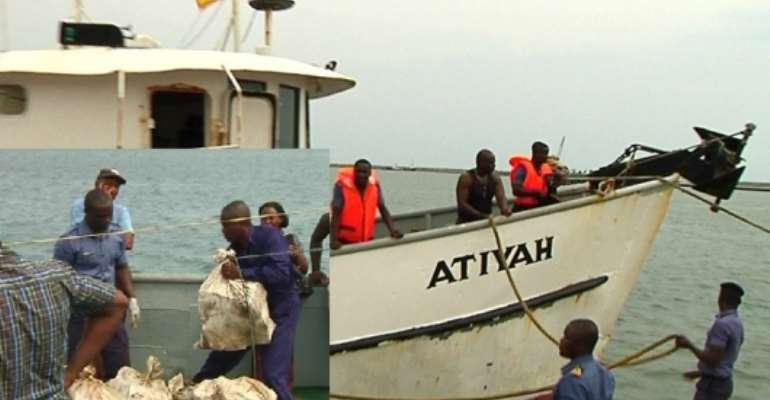 Five persons, including one Ghanaian arrested on Tuesday in Sekondi in the Western region on board a Guyanese ship containing 21 bags of cocaine worth fifty million dollars, have been pleade guilty to charges of possessing narcotic drug, when they were arraigned before an Accra High court,today, November 22, 2013.

The accused persons, Mila Ronald, captain of the ship, Perceval Curt, Samuel Mornty, Saint Praimchad with their Ghanaian counterpart, Seth Grant, were remanded by the court, presided over by Justice C.J. Hoenyenugah, an Appeal court judge, sitting as an additional High Court judge.

The accused persons after pleading guilty to possessing narcotic drug, further explained that they could not afford the services of a lawyer to defend them in the case.

The court, therefore remanded them to re-appear on December 13, this year, by which time, results of exhibits forwarded to the forensic laboratory for testing, would be available.

State Attorney, Mr. Samuel Asiamah Sampong, the prosecutor in the case assured the court that the result on the substances suspected to be cocaine will be made available on the next adjourned date.

The accused persons were on board the ship, “ATIYAH, George-Town”, which was intercepted, following a tip-off from Ghana's international security partners.

The ship was travelling from Guyana, when it was arrested and was escorted by Ghana Naval Ship, Yaa Asantewaa, to the Sekondi Naval Base.

The accused persons, together with the substances, were flown to Accra and handed over to the National Security and the Narcotics Control Board for investigations.

Police requests CCTV footage of murder of wife of GNPC boss'...
21 minutes ago