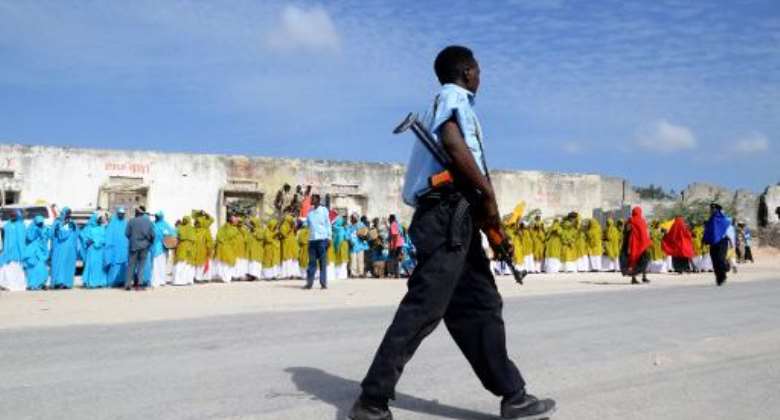 A Somali policeman patrols in Mogadishu on December 9, 2011. By Mustafa Haji Abdinur (AFP/File)

Nairobi (AFP) - The United Nations in Somalia called Thursday for a "proper investigation" after police again arrested an alleged rape victim and journalists who reported her story.

Rape, and reporting on sexual assault, is one of the most sensitive topics in Somalia, and the case is the latest in a series of arrests of victims and the journalists who aired their story.

The alleged victim, a 19-year old reporter, spoke to the independent Radio Shabelle about how she was attacked and raped at gunpoint, claiming that two fellow journalists carried out the attack.

"One of the men threatened me with a pistol, and took me to the bedroom by force...both of them raped me several times, destroying my pride and dignity," she said, in a video interview broadcast on Somalia's Radio Shabelle website earlier this week.

"I am appealing to the government to take legal action against the rapists, they might have done the same to other poor girls," she added.

Police in the capital Mogadishu have arrested the woman, as well as Mohamed Bashir Hashi, the male reporter who interviewed her, and Shabelle's manager Abdulmalik Yusuf.

Nicholas Kay, UN special representative for Somalia, said in a message Thursday the UN was monitoring the "new rape allegation in Mogadishu" and warning that "legal representation, proper investigation and media freedom (are) important issues."

Last month the Somali security forces shut down Shabelle's radio broadcasts after accusing it of illegally occupying a government building.

The victim and Hashi remain in police custody, but the station manager has been released on bail.

In February, a Somali journalist and a rape victim he interviewed were both sentenced to a year in prison, but they were released after two months in jail after the case sparked widespread international criticism.

In August, a Somali woman who alleged she was gang-raped by African Union soldiers was also held by police for questioning.