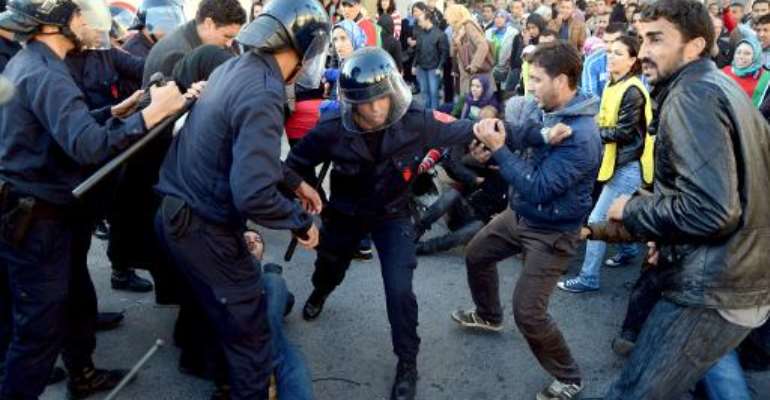 Moroccan police clash with protestors after they tried to climb the barrier of the parliament building in the capital Rabat during a demonstration held by unemployed citizens on November 20, 2013. By (AFP)

Rabat (AFP) - Moroccan lawmakers approved on Wednesday an austerity budget for 2014 in a vote overshadowed by clashes between police and unemployed graduates outside parliament.

The draft budget, approved by a vote of 164-95, includes a 3.1 percent cut in public spending aimed at reducing the deficit to 4.9 percent of GDP.

Jobless graduates, who frequently march in the streets of Rabat demanding work, protested outside the parliament, and several dozen of them clashed with the police, an AFP journalist reported.

Some 15 of them who tried to climb over the fence were arrested, the official MAP news agency reported, adding that six members of the security forces were injured.

Since coming to power in 2011, the Islamist-led government has battled to fix the country's ailing finances and reduce its ballooning deficit, which topped seven percent two years ago.

The central bank governor said in September that the government should achieve its deficit target of 5.5 percent by the end of 2013.

The new budget, which is based on a growth forecast of 4.2 percent, an exchange rate of 8.5 dirhams to the dollar and an average oil price of 105 dollars per barrel, aims to bring the deficit to below 5.0 percent of GDP.

High youth unemployment, an unaffordable subsidies system and the crisis in the euro zone, Morocco's top trade partner, have compounded the economic challenges facing the cash-strapped government of Abdelilah Benkirane.

In a bid to rein in fuel subsidies, the government began implementing a controversial fuel price indexation system in September.