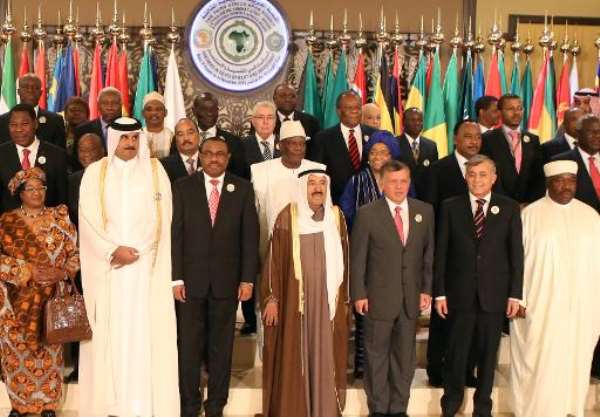 Kuwait City (AFP) - Arab and African leaders meeting in Kuwait on Wednesday wound up their first summit since the region's uprisings in 2011 by calling for closer economic and security cooperation.

The leaders issued the Kuwait Declaration which underlined the need to accelerate economic integration in the Arab world, which includes oil-rich Gulf states, and investment-thirsty African states.

They called for the creation of a joint "Africa-Arab Financing Mechanism" to fund programmes and projects, under a plan adopted at the last Arab-African summit in Libya three years ago.

The leaders at the two-day summit in Kuwait also called on the African Union and Arab League to coordinate with financial institutions and funds in the two regions to form a "working team" to finance the implementation of projects.

But there was no mention of any moves for an Africa-Arab common market, as recommended by businessmen.

It urged member states to "enhance cooperation and coordination... to combat terrorism in all its forms," and to criminalise the payment of ransoms to terrorists.

The summit was the third of its kind, and the first since 2010, when leaders met in Libya prior to the Arab Spring uprisings that toppled longstanding dictatorships there and elsewhere in North Africa and the Middle East.

On Tuesday, Kuwait's Emir Sheikh Sabah al-Ahmad Al-Sabah pledged $1 billion (740 million euros) in low-interest loans and the same amount in investments to African states in cooperation with the World Bank.

Foreign Minister Sheikh Sabah Khaled Al-Sabah said that Kuwait would coordinate with the World Bank to enter joint investments in infrastructure projects in accordance with a plan to be announced soon.

"We are aware we have huge challenges ahead but we have the desire... to achieve a real partnership with Africa," the minister told a news conference after the summit.

Arab League secretary general Nabil al-Arabi said the "outcome of the summit will achieve a qualitative transformation in the African-Arab economic ties".

Thirty-four heads of state, seven vice presidents and three heads of government attended the gathering, which brought together 71 countries and organisations.

Africa has huge resources of raw materials, agriculture and energy but lacks investments.

According to the World Bank, the continent needs about $30 billion a year just to develop its energy sector.

The International Monetary Fund says African economic growth was a solid 5.0 percent in 2012 despite the global economic crisis. Growth is forecast to ease slightly to 4.8 percent this year and rebound to 5.1 percent in 2014.

Africa has 12 percent of global oil reserves and 42 percent of its gold deposits. The discovery of large quantities of natural gas off its east coast has added to the continent's economic potential.

On the other hand, states of the energy-rich Gulf Cooperation Council have accumulated surpluses of $2.0 trillion thanks to persistently high oil prices. A majority of the assets are invested in the United States and Europe.

The leaders called for the need to boost cooperation in the agricultural field to achieve food security. They also decided to hold the next summit in 2016 in Africa, without naming a country.