3 Algerians sentenced to death for murder 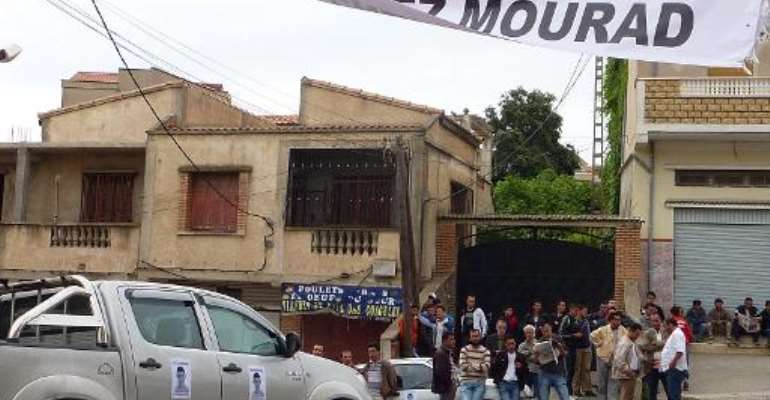 Algerians demonstrate on May 17, 2011 in towns in the Kabylie region to protest against a kidnapping. By Beatrice Khadige (AFP/File)

Algiers (AFP) - Three Algerians accused of abducting and killing a young man one year ago in the Kabylie region have been handed the death penalty, Algerian media reported on Tuesday.

A fourth defendant, accused of demanding a ransom with threats, was jailed for three years and fined, the national APS news agency reported.

Defence lawyers had asked the court in Tizi Ouzou, the main city in Kabylie, to reclassify the charges as "assault leading to death," but the judge refused, according to Algerian daily El Watan.

The court instead convicted the three suspects of pre-meditated murder, kidnapping for ransom and hiding the body of the victim, which was found several days after he was abducted.

They were given the death penalty, which is still on Algeria's statute books, although no execution has been carried out since 1993.

Ghilas Hadjou, 19, the son of a businessman in the coastal town of Azeffoune, was kidnapped on October 18 last year.

He was lured to the house of one of the three murder suspects, then under construction, where he was severely beaten and strangled, according to the police.

After killing Hadjou, they telephoned the fourth defendant and asked him to call the victim's father and demand the payment of a 50 million dinar (450,000 euro) ransom to secure his son's release.

The day after Hadjou's body was found buried on the beach in Azeffoune, the suspects, who all knew the victim, were arrested.

The kidnapping sparked an emotional reaction, with the people of Azeffoune going on strike at the time, amid rumours that jihadist group Al-Qaeda in the Islamic Maghreb, which has strong ties to the Kabylie region, was responsible.

Since 2005, more than 70 people have been kidnapped in Algeria's restive eastern region, according to local media, with most of them freed after a ransom was paid.