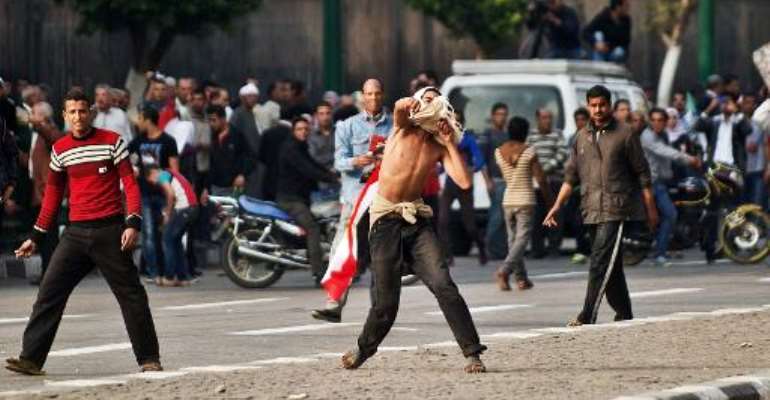 Egyptian supporters of the military regime throw stones towards anti-regime protesters during clashes in Cairo's Tahrir Square on November 19, 2013. By Gianluigi Guercia (AFP)

Cairo (AFP) - Brief scuffles erupted in Cairo's Tahrir Square on Tuesday when hundreds of opponents and supporters of the army held rival demonstrations to mark the second anniversary of anti-military protests.

Opponents of the army threw stones at supporters of the interim government it installed after overthrowing Islamist president Mohamed Morsi in a July 3 coup, an AFP correspondent reported.

They were marking the anniversary of week-long protests in 2011 against the military junta which took power after the overthrow of veteran strongman Hosni Mubarak.

At least 43 people were killed and more than 3,000 wounded in clashes between the protesters and security forces that began on November 19, 2011, just nine months after Mubarak's ouster.

But just one year later the army overthrew him following mass demonstrations against his turbulent single year in power, and installed an interim government ahead of elections scheduled for next year.

Late on Monday, protesters defaced a newly inaugurated monument to those killed in the mass protests that helped unseat two presidents in less than three years.

Hundreds of angry opponents of the army had gathered in Tahrir Square on Monday evening after prime minister Hazem al-Beblawi inaugurated the monument.

By Tuesday, the unfinished brick structure had been vandalised and daubed with anti-military graffiti and a symbolic coffin placed on top of it.

"Celebrating in praise of the army is a provocation. We are here today to mourn the martyrs," said Magda al-Masrya, 50, as she took part in Tuesday's protest against the army.

Another protester, Reni Rafat, said: "What we need is trials of those responsible (for the deaths in November 2011) and not celebrations".

Mahmoud Hisham, a 21-year-old student, said: "The revolution is still not over.

"In three years we had three systems and three traitors -- Mubarak, the military and the Brotherhood."

Facing the protesters in Tahrir Square were supporters of the army carrying posters of its chief General Abdel Fattah al-Sisi.

"With you, Sisi against terrorism," said a badge worn by one of the demonstrators.

Neither the Brotherhood nor the Tamarod movement which organised the mass protests that led up to Morsi's overthrow had called for Tuesday's rival demonstrations.

There was a light police and army presence in Tahrir itself, although the state MENA news agency said that security had been stepped up around nearby government offices and parliament.