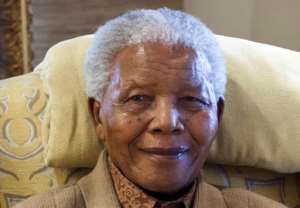 Johannesburg (AFP) - Nelson Mandela remains in a "stable but critical" condition, but "continues to respond to treatment", the South African government said in its first update on his health since September.

"The health of the former president remains much the same," according to a statement issued after President Jacob Zuma visited the anti-apartheid icon at his home Monday.

The 95-year-old was being given intensive care at home after being discharged from hospital on September 1 after a nearly three-month stay for a lung infection.

The government has largely refused to give details about Mandela's condition, citing the need for privacy, but said "he continues to recover".

Mandela's oldest grandson, Mandla Mandela, who visited the former statesman on Sunday, said he found him in a "good state".

"He is still progressing steadily but very much under a critical condition," Mandla Mandela told reporters.

Mandela's former wife Winnie Madikizela-Mandela this week told a local newspaper that he remains "quite ill" and is unable to speak because of tubes being used to clear his lungs of liquid.

He is using facial expressions to communicate, Madikizela-Mandela added.

Illness dating back to jail time

The Nobel Peace Prize winner is under the care of 22 doctors. While his pneumonia has cleared, his lungs remain sensitive, she said, adding that it was "difficult for him".

"He remains very sensitive to any germs, so he has to be kept literally sterile. The bedroom there is like an ICU (intensive care unit) ward," she told the Sunday Times.

"He remains quite ill, but thank God the doctors were able to pull him through from that (last) infection."

His lung problems date back to his time in jail when he was diagnosed with early stage tuberculosis.

His most recent 86-day hospital stay was his longest since he walked free from prison in 1990.

Mandela has been in and out of hospital since last year with lung-related complications.

South Africa's presidency said Zuma had conveyed the well wishes of South Africans and of leaders who attended a recent Commonwealth summit in Sri Lanka.

Zuma, according to his office, also told Mandela that he was "looking forward" to officially opening the Nelson Mandela Centre of Memory later in the day.

The president will inaugurate a multi-purpose centre that will run an exhibition on the life and times of South Africa's first black leader.

The centre is located within the same complex that houses the Nelson Mandela Foundation in Houghton, an upmarket suburb north of Johannesburg.

November 18 marks the day, 20 years ago, when a panel of political negotiators approved an interim constitution for South Africa and an electoral bill that would clear the way for the historic 27 April 1994 polls.