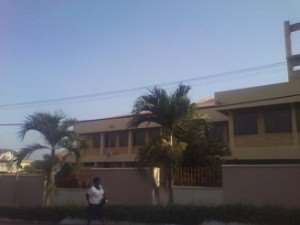 Church members of the Kaneshie Presbyterian Church are in grief following the discovery of over GH¢200,000.00 of their tithe offering been embezzled by three individuals, at the expense of the whole congregation.

The three, The Chronicle learned, are also church members, working at the accounts department of the church.

According to inside sources, for some months now, revenue from tithe offerings were not reflecting in the church's accounts, thereby raising suspicion among the leadership of the church.

This prompted them to bring in external auditors to audit the accounts of the church, resulting in the discovery of the disappearance of over GH¢200, 000.000 from the books of the church.

Hit with the news, the leadership of the church, The Chronicle learned, reported the matter to the police, leading to the arrest of three suspects, who are currently languishing in police custody, pending further investigation into the matter.

When The Chronicle visited the premises of the church yesterday, to ascertain the veracity of the matter from the District Minister, Rev. William N. Boahen Appiah, this reporter was informed that the Minister was having a nap.

Desirous of getting to the bottom of the matter, The Chronicle got in touch with the Second Minister at his residence, but the minister demanded that the reporter produced an identity card before he would comment on the issue.

“We don't talk to people we cannot ascertain their identity. Go and come tomorrow with your ID card”, noted the Second Minister, before walking off.  He would not listen to any further explanation from the reporter.  Stay tuned for more details.