"I will justify mandate given me"-President 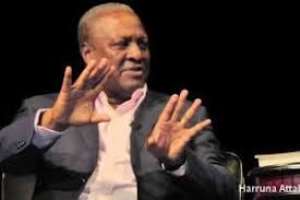 Ho, Nov. 16, GNA - President John Dramani Mahama on Saturday promised to perform in all the sectors of the economy to justify the mandate Ghanaians had given him for the next four years.

"The year started on a rather bad note, with series of fire outbreaks in our major markets, followed by the election petition, industrial strikes, energy crisis, among other issues, but thank God we are gradually getting out of them," President Mahama added.

President Mahama, who was addressing members of the National Democratic Congress (NDC), as part of his two-day official visit to the Volta Region, said government had drawn up a comprehensive programme that would address those challenges.

The President had earlier on inspected on-going projects at the permanent campus of the Ho university of Health and Allied Sciences, addressed members of the Volta Region House of Chiefs and visited the Ho market women.

President Mahama mentioned some of the prudent measures government was adopting to stem the economic challenges as widening the tax net to raise revenue, reduction of expenditure and increment of productivity at all levels of the economy.

He advised Party members not to throw their hands up in despair, but should rather throw their weight behind all government officials to execute their duties responsibly to achieve the government's better Ghana agenda programme.

He added: "I want to tell all of you here to stand firm in the face of the difficulties we are encountering, because there is hope ahead of us, and by next year, things will change for the better."

President Mahama said his administration would work hard against running a deficit budget, as that had negative repercussions on the growth and development of the economy, adding, "We will work hard to reduce the inflation and deficit rates to come out with better conditions that would spur our economy on."

He said government would also ensure that 70 per cent of the national income was no longer used for salaries and wages.

At the Ho Central market, President Mahama was disappointed that the Ghana Urban Management market rehabilitation project, which he cut the sod last year for work to begin, has not executed.

He expressed shock that although there was money for the project, nothing has been done after one year and promised to deal ruthlessly with whoever was delaying the funds in Accra.

The President denounced the bureaucratic tendencies that denied communities their fair share of developments and promised to eliminate those processes as they impeded the orderly progress of his administration.