… Ghost Names Gradually Proven To Be Staff On Leave, …..Acting CEO Blames Internal Auditor, Insults Her For Feeding Him With False Information
By Prosper Agbenyega 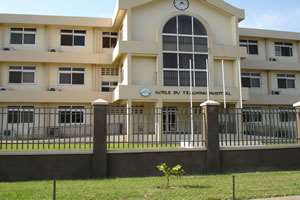 In a bid to impress government on leakages on salaries and effective revenue management of Government, Mafia Group led by Rev. Albert Okpoti Botchway, Acting CEO of the Korle-Bu Teaching Hospital, Eddie Annan and Godfred Ahianyo all Board members have raised false alarm causing fear and panic to both government and workers of the Korle-Bu Teaching Hospital on what they termed as 1,052 Ghost names on the pay roll list of the hospital.

The information which was delivered at a press conference was found out as a complete falsehood of information claimed to have been gathered from the Accounts Department of the Korle-Bu Teaching Hospital to give the 'mafia group' of the hospital a credible image of tracking down ghost names from the accounts registry.

According to Rev. Botchway, out of a total of 4252 staff of the hospital, 347 are on IGF payroll but failed to outline the illegal payments being made to a Board member Godfred Ahianyo which is also on the IGF payroll list. A clear case of conflict of interest and an illegality, which was condemned by the previous minister Alban Bagbin in writing to the Board Chairman but failed to comply to the minister's directive to seize such payments.

Indeed, Rev. Boatcway was not even sure whether the alleged ghost names were real ghosts. I n his own words, he stated, “I want to assure you that the team will thoroughly scrutinize the names and find out whether they are real ghost names. It will constitute a major drain on the state coffers if INDEED, these are ghost names.”

It can clearly be identified that the CEO Rev. Botchway is not specific and sure of his investigations on the said names hence, a rush to hold a press conference to paint a good image of himself when he himself has been found out to be an ex-convict of SIC after stealing huge sums of money in 1990 and was prosecuted.

It further revealed that the leader of the team that conducted the headcount, Godfred Ahianyo is also a scape goat of series of illegal payments drawn from IGF funds of the hospital to be paid to him as board member and also Chairman of a three member committee equivalent to emoluments of a Director of the hospital.

Investigations later conducted at the hospital revealed that most of the names being referred to as ghost names were very prominent, effectively and proactive workers of the premier hospital.

Investigations revealed that qualified personnel such as the Public Relations Officer (PRO) Mustapha Salifu, Mr. Kakaban-Director of Finance who draws his salary from Controller and Accountant General, Director General Services-Mr. Agyakwa, Director of Nursing Services Victoria Quaye, Welfare Chairman-Mr Alex Arhin, Finance General (Accounts)-Ben Duodoo, Caeser Bawa-Former Union Chairman (Supervisor, Polyclinic), Accountant in Charge of Board Allowances Auntie Becky, Lawyer Aboagye, Legal Advisor to the Hospital and currently holding a forte on contempt charges against the CEO filed by a journalist at the Fast Track High Court, Dr. Ocran In Charge of Korle-Bu Polyclinics, Auditor- Andrew Afatwao and Mr. Awudu the CEO's personal Bodyguard at the hospital are some of the names the CEO claimed are “Ghost names.”

A day after the press briefing, the false alarm bells to paint a good image of effective management of the hospital by Rev. Botwaye backfired causing fear and panic and agitation from the staff who trooped to the accounts department with their individual pay slips to lodge their protest against the Ghost names.

They lamented that most of them are currently on leave and others on study and maternity leave hence their inability to confirm their regular payments with auditors during the exercise.

Speaking to some of the staff who came to the Accounts Department with their pay slips, they believed the press conference held by the CEO was just a mafia boost to prove to the President that they are competent to manage the hospital for another term, but advised the President to sack these “irresponsible mafia leaders” from the hospital.

Rev. Albert Okpoti Botchway after several clashes at the Administration block of the hospital with staff, Rev. Botchway confronted the Internal Auditor Vivian Barabu in her office accusing her of misinforming him to give wrong information to the media and the general public, resulting in continuous weeping and demoralizing of Vivian Barabu a day after the press conference by Rev. Botchway.

This is an affront to responsible leadership of government business on health and the Korle-Bu Teaching Hospital.