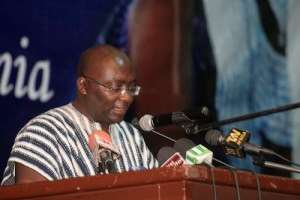 Ghana's economy has taken a backward turn and is in a reverse gear says the New Patriotic Party's 2012 running mate, Dr. Mahamudu Bawumia .

Dr. Bawumia, who made a diagnostic analysis of the Ghanaian economy at a lecture in commemoration of the first anniversary of the late Vice President Aliu Mahama at the International Conference Center on Wednesday night, said the country's record gaping budget deficit over the last few years was an indication of the economic failure of the National Democratic Congress administration.

According to him, the government's inability to live by its prudent spending policy and excessive borrowing, accounts for the current economic situation in the country. “From Nkrumah, through Acheampong, Rawlings and Kufuor, no government has incurred this level of budget deficit. The crux of the problem is that government spending in 2012 increased astronomically to 34.5% of GDP, even though government revenues amounted to 16.1% of GDP (a gap of over 100%) for the year. The government abandoned all fiscal discipline in an attempt to win the 2012 elections.”

He noted: “What is sad about this situation is that the government appears to have misunderstood its own capacity to borrow, by blindly looking at the debt to GDP ratio without taking into account the fact the GDP was rebased (i.e. statistically increased by 60% from 2007) without an attendant increase in foreign exchange liquidity. In this situation, taking comfort from a debt/GDP ratio of less than 60% would be misleading.

'For prudence, the government should be applying an adjustment factor to the traditional debt/GDP measure to take account of the rebasing that took place. Despite warnings in this regard, the government proceeded to borrow at an alarming rate. Today, it is obvious that the indiscipline of its borrowing is taking a toll on the economy.”

He added: 'What is remarkable about this state of the economy is that it is occurring at a time when the government has had access to more financial resources, in terms of tax and non-tax revenues, as well as borrowing, more than any other.'

'Ghana was transformed during the period of the NPP's tenure (2001-2008) from a low income HIPC economy to a lower middle income economy on the frontiers of emerging market status.”

He noted further: 'The economy, between, 1983 and 1991, benefited from a disciplined implementation of the government's vision, along with the fiscal and monetary discipline to accompany its implementation. However, the economic policy framework which had brought about macroeconomic success in 1983-1991, began to unravel with the transition from the PNDC to the NDC after the 1992 elections.'

Dr. Bawumia also chided the NDC administration for playing pure propaganda with the economic figure, when the dangers of its management of the economy were pointed to them prior to the elections

“Today, the NDC government's objective in the medium term is to get to a budget deficit to GDP ratio of 6.5%, the same as was the case in 2008, which they called reckless! This is what is called reverse gear, not first gear.”

Dr. Bawumia's presentation has, however, attracted some harsh reactions from government officials who have questioned his ability to make critical economic analysis.

Head of Policy Monitoring and Evaluation at the Flagstaff House, Dr. Tony Aidoo, in an interview on Radio XYZ , assessed Dr. Bawumia's presentation as one coming from an accountant rather than an economist.

According to Dr. Aidoo, Bawumia 'talks about figures, but he doesn't understand the forces that create the figures, so he takes the figures at their face-value, and then plays politics with it.'

To him, 'The problem with Dr Bawumia is that he presents himself as an Economist, and yet, his whole capability is that of an Accountant,' Dr. Aidoo said yesterday.