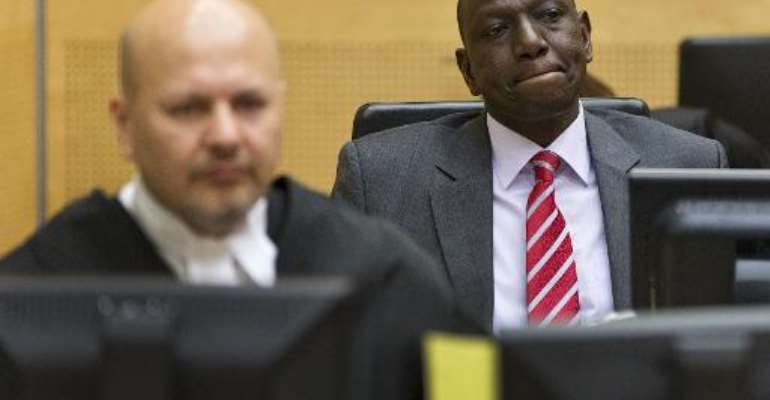 This picture taken on September 10, 2013 shows Kenya's Deputy President William Ruto ( R) in the courtroom at the International Criminal Court (ICC) in The Hague. By Michael Kooren (Pool/AFP/File)

The Hague (AFP) - A group of 20 victims of post-election violence that rocked Kenya almost six years ago have withdrawn from The Hague-based case against Vice President William Ruto, the International Criminal Court said on Thursday.

"It is clear that 20 individuals...," told their lawyer before the ICC "that they no longer wish to continue participating in the present proceedings," the court's judges said.

They added: "The decision to withdraw could have been motivated by a range of factors including security concerns."

The court's confirmation comes after it received a letter in early June by 93 victims who allegedly said they wanted to stop participation in the two Kenyan cases before the ICC.

Ruto and Kenya's President Uhuru Kenyatta are both charged with crimes against humanity in connection with 2007-8 post-poll violence that left over 1,000 people dead and several hundred thousand displaced.

Ruto went on trial in September, becoming the highest-ranking serving official to do so before the ICC.

Kenyatta's trial was due to start on Tuesday, but has now been postponed to February.

In the letter dated June 5, the 93 victims of violence in Turbo town in western Kenya said they no longer wish to take part in the trial.

At least four people were murdered in Turbo as a result of the attacks in late 2007, the court heard previously.

Seven victims changed their minds after the letter was written and will now continue to be represented in the case.

Twenty other victims could not be contacted and were therefore considered to still be taking part, the judges added.

In all, some 628 victims are scheduled to have their case represented before the court by their Kenyan lawyer Wilfred Nderitu, said ICC spokesman Fadi El Abdallah.

Ruto, 46, and Kenyan radio boss Joshua arap Sang, 38, stand accused of stoking the worst violence in the east African country since independence in 1963.

The ICC, the world's first independent court set up to try the worst crimes, allows victims to take part in trials independent from the prosecution or the defence.