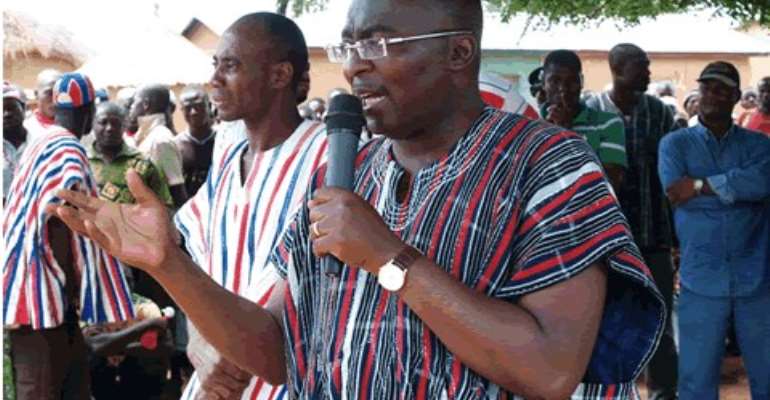 The New Patriotic Party vice-presidential candidate in the 2012 elections, Dr. Mahamudu Bawumia, has come under fire for criticising government's handling of the economy at a memorial lecture in honour of the late Vice President, Alhaji Aliu Mahama..

Dr. Bawumia, among other things, accused the government of borrowing over 20 billion dollars in five years with nothing to show for it.

He was speaking on the theme "Indiscipline in economic management."

Bawumia said the John Mahama administration has demonstrated gross ineptitude and a limited understanding of the economic issues.

Instead of being the social democrats as they have always parroted during political campaigns, Dr Bawumia said the governing National Democratic Congress (NDC) is rather practicing "Akomfem [Guinea fowl] socialism."

The NPP vice presidential candidate has since been the subject of fierce criticisms.

Even in the middle of his lecture yesterday, Alhaji Harruna Attah, who was a leading member of the NPP, staged a walk-out in protest over the comments by Dr Bawumia.

He was the Publicity Committee Chairman of the Aliu Mahama Memorial Lecture.

Harruna Attah said he was hugely embarrassed by the utterances and gross disrespect shown by the former Deputy Governor of the Bank of Ghana, to President John Mahama.

He explained a presidential staffer, Dr Clement Apaak was assigned to attend the Lecture on behalf of the president for which reason, Dr Bawumia ought to have been moderate in his comments.

Harruna Attah accused Dr. Bawumia of digressing from the original theme of the lecture which was "Youth Indiscipline and Ghana's Development."

"It was used as a partisan political platform which it wasn't meant to be and that was not the topic the young man was given to talk on," Harruna Attah told Citi News.

"It wasn't meant to be any theses of economic mismanagement to bash government.

"...Even in times of war there are times when the warring factions agree that on this particular day, let's keep our guns quiet," he added.

He said the Ghana flag hoisted at the event ground should have been a rallying call for Bawumia to extend an olive branch to all present.

Harruna Atta later issued a statement apologising to the president and dissociating himself from the comments made by Bawumia.

On his part, the deputy General Secretary of the NDC Kofi Adams accused Dr Bawumia of dabbling in "desperate propaganda".

He said such propaganda does not win elections and the NPP must begin to learn their lessons.

Kofi Adams questioned what he said is the so-called foundation the NPP, so fulsomely, propagate anytime they have the least opportunity.

"If they keep telling us that they have laid all the foundation. How come we still have energy deficits? ...That the road infrastructure, they have done all the appropriate roads?

"Look when you are desperate for power, Ghanaians are not people that you just come and tell them stories. Tell them the truth," he counselled.