Troubling Examples Of Terrorism In Ghana—Part I 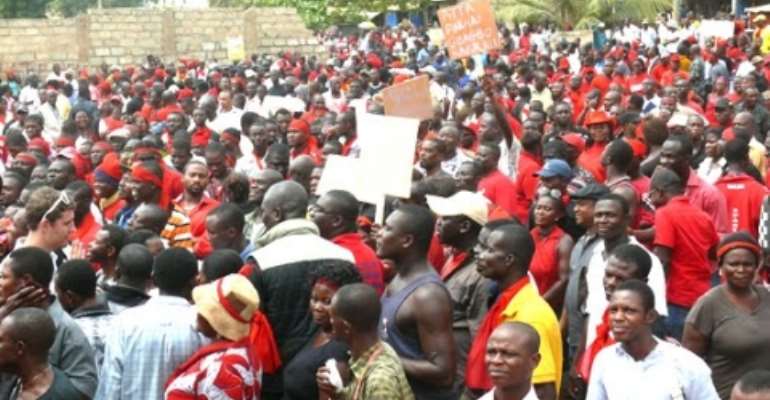 We used the serial platforms of “God, Favoritism, and Terrorism” to indict the religious terrorism of Christianity and Islam and their lingering problems in the contemporary lives of Africans. Though the scourge of religious terrorism is a global one, particularly Islamic terrorism, we chose to concentrate on Africa in light of the unfortunate passing of Prof. Kofi Awoonor and of the geopolitical proximity of terrorism to the doorstep of Ghana. Understandably, it's in the nature of man to ignore remote dangers until they suddenly assume potentialities of destructive nearness.

A narrative reprise is in order: We closed our penultimate article, “The Clash of Civilizations: Africa and the Arab World,” with a set of five-point questions. Essentially, our theoretical questions centered on comparative religion, the definition of God, the “racism” and “ethnocentrism” of God, and the politics of divine favoritism, metaphysical questions tied to the politics of religious “terrorism.” These questions are indeed important to how we relate to each other in an atmosphere of cordiality as well as via the ontology of deified otherworldliness.

Yet exploring the ontology of God or Allah is beyond the immediate scope of this essay. Moreover, as we also indicated in the penultimate installment and intend capturing it here again for clarity and reaffirmation, it's not our intention to cast aspersions on Allah, God, Christianity, and Islam. On the other hand, we are equally aware that answers to the questions do not necessarily follow the material logic of Cartesian linearity. Again, these questions are beyond simplistic processes of psychologization.

Also, we do think the claustrophobic finiteness of man's intelligence makes the project of knowing a futile exercise, if, we can agree, that, probably, religion and deification, are phenomenological byproducts of the evolutionary intellection of man. In other words, the sociologized processes of deification and religionization are creative attempts by man to make the agnosticism of otherworldliness a superior force over man's ontological fleetingness and the potential weakness of humanity. There is no need to go further than these existential complications.

Now to the topic of today—how the Ghanaian popular psychology and Ghanaian jurisprudence, in general, must look at interpretative questions related to theoretical complexities and definitional politics of “terrorism.” This immediately brings us to Akufo-Addo's “All die be die” war cry, Kennedy Agyapong's “Akans should attack and kill Gas and Ewes,” and other such incendiary ethnic provocations.

In these contexts, therefore, the exemplified legislation of Rwanda's “Genocide Propaganda,” the denial of Turkish culpability in the “Armenian Genocide,” and universal Western legislations against “Holocaust Denial”—a legal provision used against the Holocaust denier David Irving—are controversial precedents worth considering in the Ghanaian context, especially the first and third examples. However, not surprisingly, Hutus for one think Paul Kagame's “Genocide Propaganda” is a political and moral placebo. We need to go beyond the parochial partisan politics and analytic myopia of Hutu militants to see the social merits of “Genocide Propaganda.”

Revisionism has become a stock intellectual trade. Norman Finkelstein, for instances, uses “A Nation on Trial: The Goldhagen Thesis and Historical Truth,” co-written with Ruth Birn, to challenge the revisionism of Daniel Goldhagen's “Hitler's Willing Executioners.” This shameful act of tired revisionisms and calculated brouhaha are replicated wholesale via the pugilistic feints of public oratory, clenched intellectual fists mounted on the scoliosis of intellectual charlatanry in the Ghanaian intelligentsia. To wit, a system of partisan intellectualism aimed at de-emphasizing Kwame Nkrumah's signal role in founding Ghana. No amount of intellectual terrorism can neautralize the legacy of Nkrumah.

Indeed, no one doubts the positive contributions of others to Ghana's founding but the collective weight of history and evidential omnipresence of infrastructural and institutional development, indelible legacies associated with Nkrumahism, seem to be on Nkrumah's side. Yet extirpating major national problems such as “trokosi,” Witch Camps, corruption, hunger, homelessness, and youth unemployment are more important than the ideological pettiness of revisionism and the intellectual twaddling of those involved. Put another way, is revisionism more important than a girl child perpetually shackled by the chains of sexual peonage?

Lack of moral and directionless leadership has everything to do with remedial de-emphasis on pressing national problems. It's no wonder that terrorist organizations, like Al-Shabab, have taken full advantage of interregna to provide for the poor, then, strategically, turned their patronage and paternalism into recruiting exercises. We, however, wonder if Ghana's leadership sees the gravity of the country's problems. Juvenile delinquency is another major national issue. After all, isn't it a parental, community, and national problem? Juvenile delinquency necessarily breeds criminality if not checked. Juvenile delinquency may also be seen as lost intellectual property. This is why national discussions on addressing such topical problems must take the place of nonsensical revisionist talk.

On the contrary, the South African ambassador to the United States, Ebrahim Rasool, seems to have a clear understanding of the enormity of our problems as a people. He told Democracy Now's Amy Goodman the following: “And so, I think that if I were to appeal to the African in President Obama, and should he win a second term, I believe that he has an opportunity not to embrace Africa because he has sympathy for it, but because there are possibilities there, to embrace Africa a lot more fulsomely, because if we miss the next decade in Africa's development, that may be the origin of the next wave of insecurity that will hit the world. When you have 50 percent of the world's youth being concentrated in sub-Saharan Africa, ignorant and unemployed, that's where the world will come.” Therefore, our leaders must look at the plight of the African youth with this apocalyptic forecast in mind.

Furthermore, Nkrumah left us many progressive institutions and ideas which we can use to fight most of these national ailments. On the other hand, we can say with some authority that the intellectual supremacy which Nkrumahism enjoys in the public consciousness as well as in the international community partly, if not mostly, account for the stilted jealousy on the part of his ideological enemies. Don't we have to learn to divert emotional and psychological expenditure on public rhetoric to the creative resolution of matters plaguing the country? Isn't Rasool's precise definition of our problems what Nkrumah had intended to eliminate via his active participation in the creation of the Organization of African Unity?

Then again, the passage of a bill into law in France supporting the historicity of the “Armenian Genocide” constitutes another political dimension associated with the theoretical complexity of legal formulations. On the other hand, the legal codifiability of morality and spirituality is another matter. But there must be a way to circumvent the theoretical complications. Besides, the spiritual commercialization of morality and goodness must not be the sole advertising strength of religious bodies.

Granted that spirituality probably predates as well as begets religion, granted also that spirituality and secularism probably are cognate cosmological ideas, could we squeeze the lemon juice of spirituality from the apple juice of secular nationalism? We need not allow secular nationalism to dominate our politics. Neither do we advocate the dominance of spiritual nationalism in our politics. Critical balance is simply what we ask for. Our position is that every problem has either a spiritual or secular dimension, or both. Therefore, we need to explore the benefits of African spiritually in seeking creative solutions to our problems. For instance, the spiritual and intellectual dynamism of Okomfo Anokye led to many positive contributions in the institutionalization of the Asante State.

Meanwhile, the subversive idea which once circulated in Rwanda that Hutus possessed an inheritable genetic disorder predisposing them to genocidal violence and militant ethnocentrism gives the legal codification of “Genocide Propaganda” a heavy moral shove in the right direction. Also, calling the Ewe “trokosi,” the Asante “kokoase ni,” or the Northerner “Tani,” “Pepeni,” or “Ntafuo,” to say the least, is neither proper nor civil in our contemporary civilization of intra-national socialization.

And if we agree that the perpetrators of the Rwandan Genocide killed close to a million people, why didn't we, the African Union, label them “terrorists”? Inter-ethnic wars must be seen with the same political and social seriousness we give “terrorism.” In fact, M23 should have been declared a terrorist organization long ago before being corralled and forced to lay down their arms. Unfortunately, by and large, Africa waits till the West has labeled a group “terrorist” before following suit, this, when the group itself is African and has been terrorizing Africans for ages.

The lack of political readiness and of judicial pro-activeness on the part of the African Union has proved disastrous for Africa. In effect Western interventionism must not drive our initiative. Ours must be necessarily spontaneous. Comparatively, how many people have Al-Shabab killed since it came into material existence? Close to 5 million Africans have been senselessly slaughtered in Eastern Congo in the past few years, yet the African Union doesn't legally, politically, and morally see it expedient to label the killers “terrorists,” although the UN has implicated both Rwanda's Paul Kagame and Uganda's Yoweri Museveni, two notable darlings of the West, in the mass slaughter. Here, again, Germany and America took the lead in withholding portions of their aid to Rwanda and Uganda to force the two leaders to take the indictment of the United Nations with seriousness. Where was the African Union?

Let's ask this question: What do the Rwandan Genocide, the terrorist death of Prof. Kofi Awoonor, the sporadic outbreaks of inter-ethnic conflicts in Northern Ghana (and other parts of the country), and the Holocaust in Eastern Congo mean to the leadership of Ghana? Notwithstanding our reservations about Kagame and Museveni, Ghana may have to appropriate the Rwandan precedent to legislate against subversively fiery public rhetoric with the potential to ignite inter-ethnic war!

Here, we advance the controversial theory that Ghana's revised constitution must be given wide latitude of self-expansion to accommodate the criminalization of “trokosi,” “female genital mutilation,” “statutory rape,” “child soldiering,” “civil wars,” “child slavery,” “coup d'état,” “dictatorship,” “kleptomania,” “ritual murder,” etc., as part of the larger definitional framework of “terrorism.” We may also want to consider the inclusion of the inveterate practice of nepotism and cronyism in our new definition of “terrorism,” which includes, among others, definitions given by the United Nations and the African Union.

We shall return with a sequel…