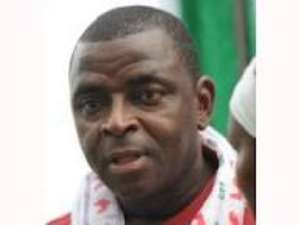 The Convention People Party (CPP) has called on president Mahama to engage the nation on the corruption issues raised by Mr. Sumana Bagbin.

In a statement signed by Nii Armah Akomfrah ,   Director of Communication of the party, he noted that: 'The President is compelled by his responsibility to “we the people” to tell the nation how he proposes to deal with the question of corruption in his government and the development policy guidelines of his development philosophy.' Below if the full unedited version of the statement

The Convention People's Party is dismayed by the current conversation on governance in our country and the descent of our nation to despair and hopelessness.  We refer to the exposures by the Honourable Member of Parliament for Nadowli West, Alban Sumana Bagbin and the statement of the General Secretary of the NDC on the disclosure.

Mr. Bagbin alleged in a public statement that the country is governed by the family and friends of the President and that the government of the NDC is rife and riddled with corruption.

According to the acerbic General Secretary of the NDC, Mr. Asiedu Nketia who referred to the 17 presidential aspirants of the NPP IN 2008 as 17 thieves, the revelations of Mr. Bagbin are directed at the NDC for internal discussion. He directed all supporters of the party to discuss the issue within the structures of the NDC.

The CPP would want to point out to the General Secretary of the NDC that Mr. Bagbin did not speak to the NDC, but for and about the nation. The issue, therefore, should be discussed by all, with the expectation to rid the nation of the demons of our development and prosperity.

The CPP, therefore, calls on the Presidency to engage the nation on the issues raised by Mr. Bagbin. The President is compelled by his responsibility to “we the people” to tell the nation how he proposes to deal with the question of corruption in his government and the development policy guidelines of his development philosophy.

The issue relates to development policy so it is inappropriate and unacceptable for the President to refer to his person and character in reference to or as substitute for development policy. The President is challenged to elucidate for the nation his vision for the transformation of our society that is in fulfilment of the mission of our political and economic history.

The CPP wishes to point out to the President that his analogy of a nation/car in first gear development is inexact and unsatisfactory. His failure to note the weakening or our diminished   resolve and capacity to struggle for economic freedom and the descent to new form of dependency and subjugation in our development efforts is cause for concern.

It is the observation of the CPP that since the CPP government of the first republic, the development of our country has been moving backwards and not forward under the governments of the NDC and NPP.

Under the full employment policy of the CPP government of the first republic dubbed “Work and Happiness” investments were made in the agricultural and manufacturing sectors to cater for all human needs and the rate of unemployment was low.

The economy was on the threshold of industrialisation and the achievement of an internally sustained economy. Investments in the social sectors of health and education gave Ghanaians a satisfactory standard of living,

Currently as a result of the privatisation and divestiture of the public investments of the CPP government of the first republic and the consequent redeployment and redundancy programmes of the NDC and NPP governments the rate of unemployment is unbearable. Our manufacturing sector has been suffocated and undermined with a misguided trade liberalisation policy.

Our country is as a result, highly import dependent with a huge trade deficit, a depreciating currency and unsustainable exchange rate. The dropout rate in the education sector is high. The housing deficit is rising and the living condition of our people is deplorable.

There has been a complete lack of ability for progress in this nation by post-1966 governments especially this NDC government. There is a frightening lack of ideas & complete absence of any meaningful programme of development.

The legacy of the 1st Republic that has sustained this nation to date is being outstripped by the fierce population growth, placing the nation in grave danger.

A word to the President from the CPP is that this country is not moving forward but backwards and our people are living in dire economic circumstances with few opportunities. It is time for the NDC government to engage the nation with clearly defined and enunciated development policy.

The opulence in government must be reversed because it is sickening when there is such widespread abject poverty. We take the opportunity to thank Mr. Bagbin for his recognition that he is in bad company. As a man of integrity he cannot and should not remain there.

As for the government, the damage to its moral authority to govern by the allegation of its own 'wise man” is irredeemable, and Ghanaians will definitely make an electoral note in 2016.