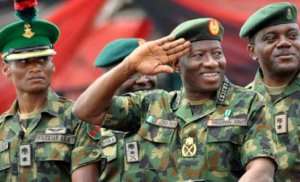 Eighteen years today, Nov. 10, 2013, Nigeria killed Ken Saro-Wiwa and eight other Ogonis for summing the courage to think deep in a bid to nonviolently and peacefully outsmart oppression, and have in the long run inspired the world despite intimidation. Not so surprising, Goodluck Jonathan, an Ijaw and first Niger deltan to be Nigerian president, by his unfriendly acts toward Ogoni seems to have endorsed and standing by this decision. By refusing to implement the UNEP report on Ogoni that shows the depth of degradation in Ogoni and the danger it poses, the very revelation Saro-Wiwa made and was listed on Nigeria and $hell's obituary candidate schedule.

Jonathan seems to be defending and justifying this killing, which primarily resulted from Ogonis drafting a simple bill known as Ogoni Bill of Rights (OBR) for respect and freedom or equality, justice and peace. This testament that many, including Ijaws have today emulated put in clear terms demands, that aren't extraneous. They're for environmental protection, which UNEP report justifies, the prevention of Ogoni culture, including languages from extinction; and adequate representation as of right in all Nigeria's national institutions.

The bill also sought resource control, at the level of a fair proportion of the people's economic resources for their development, though the proper and current Ogoni demand is the full control of their resources and taxes to be paid to the government, so that others will also contribute to the center and not wait parasitically for Ogoni oil money and those of others to survive.

In addition, political autonomy or a state for Ogoni in Nigeria that, will grant its people self-rule or self-governance not alien to Nigeria, rather has been granted and replicated all over the country was and is also demanded. These just and fair demands and their education, mobilization thereof, were the reasons Saro-Wiwa and others were killed. Ogoni Nine were killed for nothing more, rather Saro-Wiwa planned and led Ogonis to seeking their fundamental rights, even though the government and politicians lied that Saro-Wiwa was used by outsiders to attempt breaking the country.

The OBR is clear and there is no such evidence anywhere pointing to such accusation other than where Saro-Wiwa occasionally cited the disintegration of former Soviet Union and Yugoslavia as possible fate that could be Nigeria's (dynamics of history as he put it) should the rulers of Nigeria continue to oppress, steal from and kill minorities, other repressed Nigerians instead of respecting their rights to human dignity and self-determination.

Nigeria rulers, as backward as they're and will continue (except they open up to learn new things) to be weren't used to such honest intellectual argument, mobilization and boldness by Saro-Wiwa of one of the minority ethnic groups they believed couldn't at any instance rise to the occasion of challenging the status quo and educating the country on their rights, thus felt threatened for decades of wrongdoings-cheating and oppression of oil bearing communities of Niger delta. Saro-Wiwa's guts, enlightenment was as scary and threatening to corrupt and rogue, lazy Nigeria rulers/politicians as a Sovereign National Conference, which they fear could break the country, whereas could also correct the anomalies with a proper peoples' constitution.

Meanwhile, though this unjust, illegal and primitive killing by hanging was ordered by late Sanni Abacha in a military regime (1995) and writers, politicians, leaders, etc. have continued to pin this killing on Abacha. The reason Saro-Wiwa wrote, spoke and mobilized Ogonis to peacefully confront their tormentors (Nigeria and $hell, et al) is a policy made by the so-called major ethnic groups. Of course, these groups are: Hausa-Fulani, Yoruba and Igbo. The fourth is Ijaw, though had no influence and was oppressed then until now it's the president.

This policy was used to steal Ogoni and Ijaw/Niger delta oil, gas and degrade the environment while using money from the stolen wealth to develop these first three groups and for individual embezzlement. As such twenty-three years after the OBR was drafted by Saro-Wiwa and presented to the Nigerian government under military dictator Ibrahim Babangida (1990), and eighteen years after the death of the Ogoni Nine and Abacha, nothing in the bill of rights has been attended. Not even the current administration of a so-called first Niger delta president, Jonathan, has seen any reason to respect and honor the hard work, sacrifice of Ogonis, whose struggle and blood helped uproot him from the dust.

The point here therefore, is that, although Abacha killed Saro-Wiwa and others during military regime, the decision to kill them, not minding the ethnic group or region of a Nigerian president, is believed by these rulers and as a matter of policy that the killing is in the best interest of the country. This is despite the fact that the OBR is in plain language, thus demands what other Nigerian groups including Jonathan's Ijaws (Bayelsa State) have. So the decision is a national policy and not restricted to Abacha and the military, therefore the oppression continues.

Let us face reality. Abacha or the military isn't the reason eighteen years later, successive governments have refused to apologize to Ogonis in the face of the truth. It's a national policy that's why they refused to decriminalize the Ogoni Nine and that's why the National Assembly refused to take seriously a bill sponsored by Sen. Lee Maeba about 2010, asking that Saro-Wiwa should be decriminalized and granted national recognition, given that the Federal government killed him unjustifiably.

It's also because of the national policy to teach Ogonis a bitter lesson for having the audacity to demand their rights like others, and exposing Nigeria's conspiracy with $hell stealing Ogoni oil and stopping their oil from flowing that Ogoni cleanup and the UNEP report have been abandoned by a Niger deltan in person of Jonathan whose ijaw group also suffered similar fate like Ogonis and others in the oil-rich region.

Given the above, and acknowledging the fact that every conflict deserves an end in the name of justice, equality and peace. I'm calling on Nigeria, especially politicians of Hausa-Fulani and Yoruba, Igbo and Ijaw and those of other groups or regions to rethink. They'd put politics that doesn't work, but decimate people such as Ogonis aside and cause measures that will repose public confidence in government and rulers/leaders.

The time has come when politicians no matter where they come from should give Ogonis (and other minorities and oppressed of Nigeria) in this circumstance the reasons to trust and respect them as leaders and support their agenda including re-election. It's time to bury dirty, destructive and bloody politics to forge a political front with a will to fully implement the UNEP report on Ogoni, because it's the best thing to do and non-negotiable to Ogonis. It's absurd and unthinkable, despicable that the rights of the Ogoni people to their land, economic resources and other fundamental rights have remained trampled and the people continuously disrespected despite their peaceful and nonviolent principle.

The policy and tactic by politicians to continue ignoring the Ogoni Bill of Rights (OBR), which simply demand what other Nigerians are enjoying and seeking a workable way forward for the country, while rewarding and promoting militancy and armed struggles is preposterous and stupid, thus counterproductive. Or is rewarding bad behavior a measure by Nigeria rulers in their seeming illusion or believe inviting Ogonis to bear arms as the last resort to save themselves and land and considering that arms bearing is what works? It's time to rethink and respect Ogonis, treat them as equal members of the country...and extend same fair treatment to all groups irrespective of size or political and economic advantage or disadvantage.

If Nigeria truly want peace and unity then it's proper for the rulers to respect and honor the sacrifices of Nov. 10, 1995; right the wrongs done to Ogonis by immediately revisiting the OBR and among other steps that should deal with the demands therein start the full and unabated implementation of the UNEP report that could change the lives of Ogonis, save their environment and change the way most Ogonis think about Nigeria.

Indeed Nigeria is a country Ogonis like most other ethnic groups didn't bargain nor sign any document to be part, but forced against their wish by the British, therefore have moral and legal basis to contest their continuing colonization or hostage-taken by Nigeria. Respecting and doing right by Ogonis can change every ill-feelings and make them believe strongly in Nigeria once again, but the contrary is dangerous than a time-bomb.