Okyenhene Lobbies US Gov’t On Support For Mined Land Reclamation 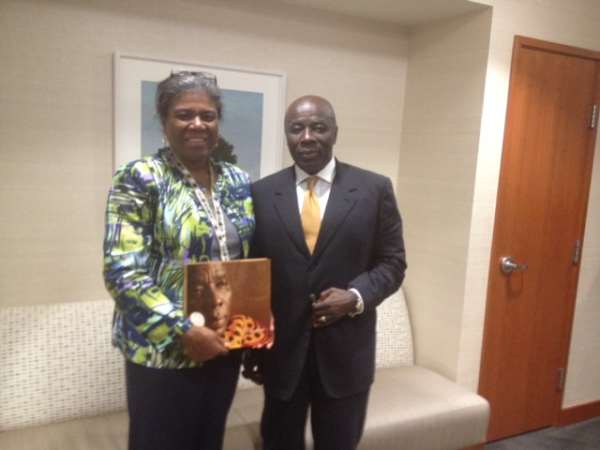 The Okyenhene, Osagyefuo Amoatia Ofori Panin, has impressed upon the United States government to extend the work of the United States Agency for International Development (USAID) to cover the growing environmental and economic challenges afflicting several communities in Africa, which have been devastated by small scale and illegal surface mining.

The Okyenhene, the traditional ruler of the Akyem Abuakwa State in Ghana, specifically called for assistance in efforts to reclaim mined lands that have become economically unproductive and hazardous to the environment.

He made this appeal for assistance in Ghana's land reclamation efforts in a meeting held at the US State Department, Washington DC, last Wednesday, with the Assistant Secretary of State for Africa, Linda Thomas-Greenfield.

Small-scale mining and illegal mining are carried out in rural farming communities, with devastating consequences to crop land as vegetal cover is destroyed and upper soil excavated to access the mineral bearing soil underneath.

The poverty in Ghana's mineral-rich farming communities has led to farmers selling off their lands, the very source of their regular subsistence income, to illegal miners, who abandon the mined land after 3-5 years, leaving the environment unsafe, unhealthy and unproductive.

The Okyenhene, who is on a three-week working visit the United States, impressed upon the head of the US State Department Bureau of African Affairs, about the need for her government to seriously factor reclamation of mined lands in its international development programs with countries like Ghana, which are struggling to deal with the social, economic and environmental costs of surface mining.

Mrs Thomas-Greenfield nodded her approval, pointing out that this falls directly within the USAID programs of environmental sustainability, food security and agriculture, global health and humanitarian assistance.

She, therefore, directed that the necessary consultation be done with the Ghana office towards this end.

Until last August, the USAID's main funded activity in Ghana was the $9.6 million Transition And Persistence (TAP) which lasted three years. It focused on access to Junior High School education in rural Ghana, especially.

With illegal mining becoming a major environmental and security issue, worsened by the influx of foreigners from both Asia and the West, Okyenhene sees it as a priority area for development assistance worth considering.

Surface mining is considered as the greatest agent of land degradation and destruction in Ghana now, affecting an estimated 13% of the total forested land of 240,000km2 of the country, mainly farming communities, resulting in excavations to depths of up to 3 meters.

Surface mining also destroys water bodies with mercury pollution and mud. The Birim River, the main source of water in the Akyem communities, for example, is now in many areas not fit for consumption.

Ghana's Mining Act, 2006 (Act 703) requires mining concession holders, including small-scale miners, to post financial security ostensibly to cover the cost of environmental damage. This is supposed to be used to reclaim the mined site in case of default.

But, in reality, this has proven to be either insufficient or that very little of this is ploughed back to reclaim the mined land. The situation is even worse when it comes to illegal mining, popularly known as galamsey, which in the last 5 years especially, has destroyed large chunks of the Abuakwa forest and farm lands.

According to a report published this year in the American Journal of Environmental Protection, which looked at surface mining in Akyem Hemang, Fanteakwa District, the estimated cost for reclamation of an acre of mined land excavated to a depth of 900mm is about $52,419.33 (Gh¢110,000), inclusive of 2-3% for maintenance.

The report, 'Technical Report on Reclamation of Small Scale Surface Mined Lands in Ghana: A Landscape Perspective', was done by JBK Aseidu, University of Cape Coast.

During his visit at the State Department, the Okyenhene also took the opportunity to talk about the University College of Agriculture and Environmental Studies (UCAES), an academic initiative by the Akyem Abuakwa Traditional Council. The University College is located at Bunso, in the East Akyem Municipality, in the heart of his kingdom.

He told the Assistant Secretary of State that the tertiary institution, the first of its kind to be established by a traditional ruler in Ghana, was set up to focus on the critical 21st century challenge of sustainable development in Africa.

He spoke of the need to invest more in educating the young people in rural Africa in order for them to own and lead the sustainable development of their communities. So far, he sees more destruction than emigration and development.

“The excuse that the rural folks do not have the capacity is just that, an excuse. The capacity to learn, to aspire, to acquire the tools to prosper are there. What they need is to be so empowered,” he said.

Mrs Thomas-Greenfield praised the Okyenhene for offering the kind of leadership Africa needs. “If everybody in Africa have your attitude, Africa will be so much better,” she said to the Okyenhene.

She regretted the situation where so many educated Africans were not investing what they have achieved back into their communities.

She also expressed concern about Africa's growing youth unemployment and the threat of criminal chains across West Africa.

The former US Ambassador to Liberia, warned, “When young people don't have vested interest” in their societies they become easy prey “to criminal gangs and up in jail.”

While singling out Ghana as a worthy exception, Ambassador Thomas-Greenfield lamented the continuous stay in power of some African leaders who simply refuse to give way.

She stressed on the need for Africa to make conscious efforts to train and prepare a new generation of leaders, with the dynamism and patriotism to confront and overcome 21st century challenges.

She told Okyenhene about the Obama Administration's Young African Leaders Initiative (YALI), a long-term effort to invest in the next generation of African leaders and strengthen partnerships between the United States and Africa.

Victoria Hammah, the former Deputy Minister of Communications and Sammy Awuku, a youth leader of the opposition New Patriotic Party, were among a group of young Africans who recently attended the program in Washington, DC.

“We are looking at bringing 500 young people next Summer,” she said.

The next phase of YALI, as stated on the State Department's website, will develop a prestigious network of leaders across critical sectors, cement stronger ties to the United States, and offer follow-on leadership opportunities in Africa, with the goal of strengthening democratic institutions and spurring economic growth.

The Okyenhene was accompanied by his Special Advisor, Dr DeForest B Soaries, Jr, Senior Pastor of the First Baptist Church of Lincoln Gardens in Somerset, New Jersey and a former Secretary of State of New Jersey. 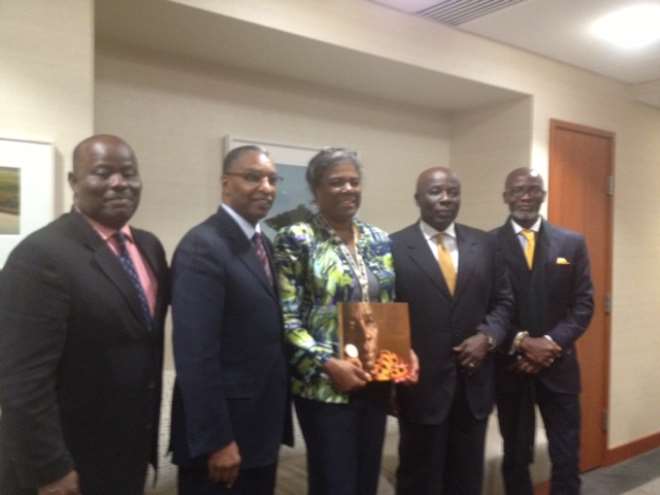 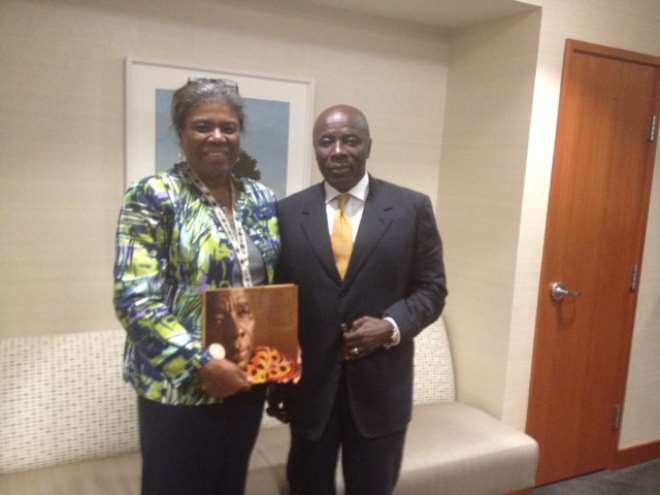 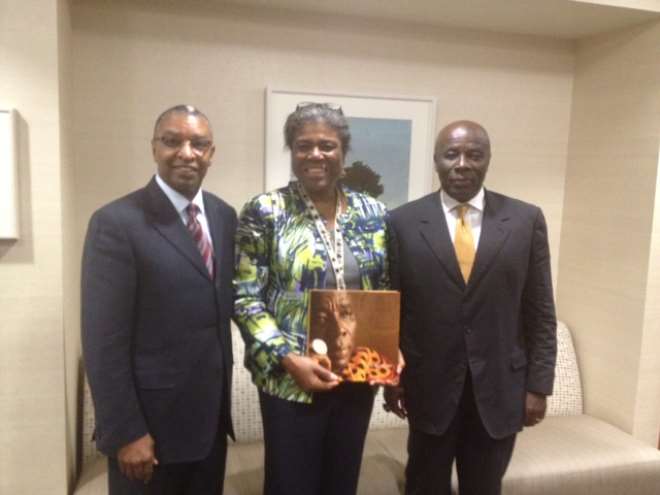 WITH DR SOARIES AND THE ASSISTANT SECRETARY OF STATE