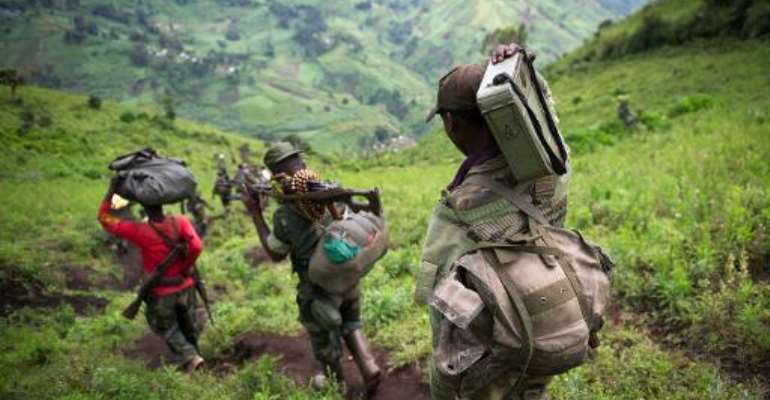 This picture taken on November 30, 2012 shows M23 rebels withdrawing through the hills having left their position in the village of Karuba. By Phil Moore (AFP/File)

Nairobi (AFP) - Rwanda, under intense international pressure over its alleged covert aid to M23 rebels in the eastern Democratic Republic of Congo, has maintained total silence since the group's defeat.

The March 23 Movement (M23) announced this week it was ending its 18-month insurgency after suffering a resounding rout at the hands of the Congolese army with key backing from a special UN intervention brigade.

The rebels are now under pressure to sign a formal peace deal on Monday in Uganda, to where most of its fighters have fled. Scores of wounded fighters have also fled to Rwanda.

UN experts have accused Uganda and in particular Rwanda of backing the rebels, and despite angry denials, officials in Kigali have been clearly anxious over the turn of events.

On the eve of M23's formal surrender, Rwandan Foreign Minister Louise Mushikiwabo warned in a radio interview that Kigali's arch-foe, the DRC-based Rwandan Hutu rebels of the Democratic Forces for the Liberation of Rwanda (FDLR), were moving into positions abandoned by the M23.

"Our intelligence reports indicate that FDLR is coming close to the Rwandan border as M23 is chased out of the territory," she said on local radio KFM on Monday.

The FDLR, one of a myriad of rebel outfits operating in the Kivu region, is a descendant of Rwandan Hutu extremist groups that carried out the 1994 genocide, during which some 800,000 people, mostly ethnic Tutsis, were murdered while the world stood by.

Kigali's minority Tutsi-led government sees them as a continuing threat to Rwanda's security, which goes some way to explaining their alleged support for the M23 -- a Tutsi-dominated outfit.

Rwanda's recent silence contrasts conspicuously with its threats of retaliation made just a couple of weeks earlier when shells allegedly fired by the DR Congo army hit its territory, raising fears that the conflict could widen.

Rwanda's first venture into the former Zaire came in 1996, aimed at preventing the perpetrators of the 1994 genocide from re-arming. That drew little or no criticism at the time -- partly because of Western guilt over failing the stop the genocide.

Its subsequent ventures into its mineral-rich neighbour, starting with the second Congo war in 1998, have been gradually less popular, but it was its backing for the M23 rebels, who are accused of rights abuses including rape and recruiting child soldiers, that sparked a fierce diplomatic backlash.

In the 18 months of M23's existence, Rwanda has come in for criticism from even its most loyal supporters: foreign capitals including Washington, London, The Hague, Berlin and Stockholm suspended or cut some of their bilateral support to Kigali, which they have otherwise championed for its remarkable post-genocide economic recovery.

"Rwanda overplayed its hand in the M23 gamble," said Kris Berwouts, an independent analyst on conflict and security in the Great Lakes region.

"The reaction of Rwanda's traditional partners went way beyond its (Rwanda's) worst fears... it was absolutely clear that its future moves and actions would be looked upon with great suspicion," he said.

Analysts have largely attributed the M23's humiliating defeat to intense pressure applied by the UN Security Council and particularly the United States on Rwanda, ensuring that Kigali could not afford to bail out the rebels, whose military leader Sultani Makenga is under UN and US sanctions.

Rwanda "had no choice" but to stand down amid the latest fighting, another regional expert told AFP.

Analysts also cited differences of opinion within Kigali's power structure -- centred around strongman and President Paul Kagame, who has dominated the country since his then-rebel Rwandan Patriotic Front ended the genocide in 1994.

Some figures in Kigali, analysts say, want to maintain a strategic presence in North Kivu -- for both security and economic reasons -- while others think it is no longer worth it.

It now remains to be seen how much enthusiasm the UN intervention brigade will put into going after the FDLR and other armed groups that terrorise civilians -- seen as the key next step in efforts to put an end to two decades of war and regional meddling in the region.