Ghana Federation of the Disabled to hit the streets if... 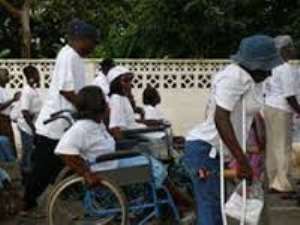 The Ghana Federation of the Disabled is threatening to hit the streets if government does not reconstitute the governing boards of the National Council of Persons with Disability and the Mental Health Authority or face series of demonstrations.

According to Federation, since the mandate of the boards expired in April last year, government has ignored their problems.

President of the Federation, Yaw Ofori Debrah told JoyNews they are giving government two weeks to reconstitute boards or face series of demonstrations.

He bemoaned the delay on the part of government to reconstitute the board after names have already been proposed.

“The boards are in charge of formulating policies, programmes of the institutions and also serve as a link between persons with disability and government so if they are not there, it means all these functions cannot be undertaken” he noted

Yaw Ofori Debrah called on government to as a matter of urgency heed to their call or face their wrath.