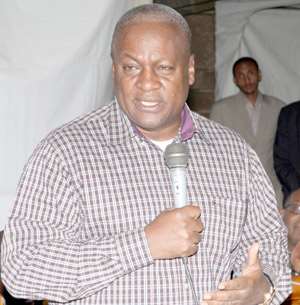 The public may never get to know the content of the fabled forensic report on the spate of market fires that ravaged the country during the early part of this year, Daily Guide has gathered.

According to James Agalga, the Deputy Interior Minister, the contents of the forensic report is not for public consumption, saying it would compromise national security if released.

'Whatever is contained in that report in one way or the other has security implications…, and so I'm not too sure that the proper thing to do is to come out and discuss the content of the report in public,' The Deputy Minister told Accra based Citi FM in a curious twist of position.

'When you do that and certain recommendations contained in the report will have to be implemented, you will have compromised security because you have discussed the content,' he stated.

This latest position of the John Dramani Mahama-led National Democratic Congress (NDC) administration is sure to deal a decisive blow to quest by all sections of the Ghanaian society, including Parliamentarians, yearning for explanations for the cause of the mysterious fire outbreaks that destroyed millions of Ghana cedis worth of traders' assets. Between January and May this year, the country recorded over 2,200 infernos that mainly consumed public places such as markets and offices and was estimated to have destroyed millions of Ghana cedis worth of goods and properties.  It was unclear what phenomenon was fueling the sporadic fire outbreaks.

As far back as August, the Parliamentary Select Committee on Defense and Interior stated its reservation about delays in the release of the fire report.  Chairman of the Committee, George Arthur, was quoted as saying: “The security of the nation is our concern; the report will let the committee know if the Fire Service has performed their functions effectively, whether the outbreak was the cause of negligence of somebody or whether it is arson or whatever. That is the reason why the Committee wants the report.”

The legislators have this week repeated the call for the release of the report, but it appears the report would only be for the consumption of President Mahama and his officials. 'Remember the investigators came in at the instance of the president and so it is only proper that before we start talking about the contents of that report, the president has to see it and give us certain directives'. We have the report, the president is going to digest it and when directives are given and we start implementing them, people will see,' the Mr. Agalga stated. Information reaching DAILY GUIDE indicates that loads of charred rubbles from the devastating Kantamanto and Kumasi Central Market fires were flown to the USA for forensic investigations. The painstaking forensic analysis of the remains of these mysterious markets fires took several prompting by the general public before it was released. Pre-emption Even before proper investigations were concluded, President Mahama and the Chairman of the NDC, Dr. Kwabena Adjei,  indicated that it was the handiwork of 'arsonists' and 'political opponents'. While waiting for the report, a deputy Information Minister, Murtala Mohammed,n also waged into the fray by confirming the arrest of some people tagged as the 'arsonists'. But critics fired at the government because it appeared the alleged arsonists were affiliated to the opposition New Patriotic Party (NPP).

They were arrested in 'Rambo style' amid warning shots at Avenor near the Neoplan Station in Accra precisely at a place known as 'Articulator Station' on Wednesday June 19 at about 5pm.

Left Out
Apparently the Ghana National Fire Service (GNFS) was not part of  this forensic investigations, as Billy Anaglatey, the Deputy Public Relations Officer (PRO) of GNFS, recently told Daily Guide that they were also conducting their own investigations into the devastating inferno.

'…We are not investigating that…,' he said, referring to the forensic report.

When pressed to state the time for the release of the GNFS's report on the fires, the GNFS deputy PRO admitted that he couldn't possibly tell, 'Our investigation is still ongoing, we have not concluded yet. Nobody would be able to tell [when the report will be released]. It is the factors on the ground that will determine how long an investigation would end; I am just surprised that people are pressing for this particular investigation,' he stated.

'It is an investigation into an area that has been destroyed, so you need to painstakingly search and determine what exactly is the cause of the fire, so there is nothing anybody should rush for.'

The conflicting status of the fire investigation has forced critics to intensify their demand for a full disclosure of the factors responsible for the nerve-racking fire outbreaks.  By: Raphael Ofori-Adeniran