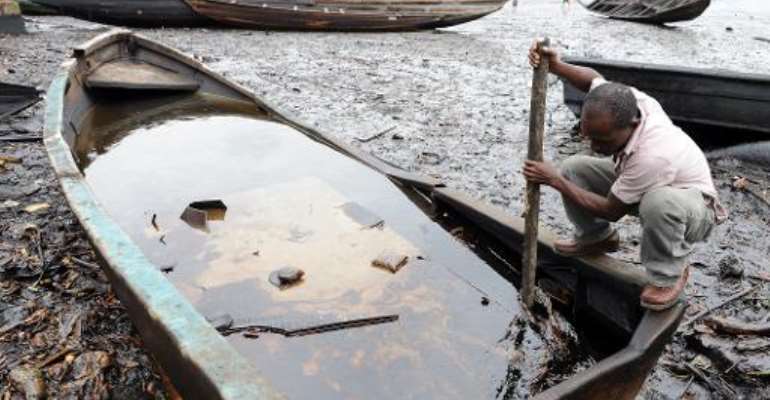 An indigene of Bodo, Ogoniland region in Rivers State, tries to separate with a stick the crude oil from water in a boat at the Bodo waterways polluted by oil spills attributed to Shell equipment failure August 11, 2011. By Pius Utomi Ekpei (AFP/File)

Lagos (AFP) - Amnesty International alleged on Thursday that Shell has repeatedly misrepresented the cause of oil spills in Nigeria, blaming criminal sabotage to avoid liability, in a charge the Anglo-Dutch energy giant dismissed as "unsubstantiated".

The number of spills in the southern Niger Delta region, home to Africa's largest oil industry, was "staggering", the London-based rights group said in a new report, "Bad Information. Oil Spill Investigations in the Niger Delta".

Shell, the largest onshore operator in the delta, has reported 348 spills since the start of 2012, while the Nigerian Agip Oil Company, the Nigerian subsidiary of Italy's ENI, has reported nearly 1,000 over the same period, it added.

Oil companies, and particularly Shell, have manipulated the results of spill investigations, the report stated, blaming oil thieving gangs when the firm's neglected, decaying infrastructure may be the cause.

The spill investigation process was inherently flawed, according to Amnesty and the Centre for Environment, Human Rights and Development (CEHRD), a local group which co-authored the report.

Probes to determine the extent of Shell's liability for a spill are funded and largely controlled by the company itself, the organisations said.

"Shell looks to blame others based on investigation reports that, in some cases, amount to nothing more than dodgy dossiers," said Styvn Obodoekwe, director of programmes at CEHRD.

The federal body charged with carrying out independent technical analysis of spills lacks the resources and expertise to credibly do its work, the rights groups charged.

Officials from this body, the National Oil Spill Detection and Response Agency (NOSDRA), did not answer calls seeking comment.

Pipeline sabotage is a massive problem in the delta and plays a central role in the continuing environmental devastation in the region, independent analysts have said.

Gangs break into the pipelines and syphon off crude for sale on the lucrative black market, a key element in the oil theft trade which costs Nigeria at least $6 billion (4.4 billion euros) in lost revenue each year, according to official estimates.

This sabotage inevitably causes spills which remain "the main cause of oil pollution in the delta today", said Precious Okolobo, spokesman for Shell's Nigeria subsidiary, the Shell Petroleum Development Company of Nigeria (SPDC).

"SPDC regrets that some NGOs continue to take a campaigning approach rather than focusing on on-the-ground solutions," he added, rejecting Amnesty's "unsubstantiated assertions".

Relying on analysis from the US pipeline specialist Accufacts, secretly filmed video of an oil spill investigation and other material, Amnesty and CEHRD said official conclusions about the cause of spills can be "very subjective, misleading and downright false".

"Corrosion, poor maintenance of oil infrastructure and equipment failure," are a main source of the problem, along with criminal acts, the report said.

Both Shell and Agip "should be held legally liable failure to... protect their systems", the groups argued.

Aside from suffering from decades of oil pollution, Niger Delta residents have largely not benefitted from more than six decades of crude production, with much of the energy revenue stolen through wide-scale corruption.