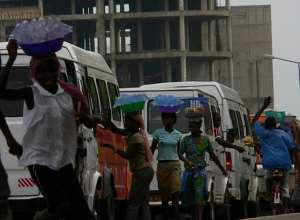 Spontaneous reactions from consumers against arbitrary price increases have paid off. It can safely be said that Ghanaian consumers are now becoming powerful than ever before.

They indicated that the producers of sachet and bottled water have a duty to do something about the current wholesale price of the sachet water to help cushion the finances of the retailers.

The resilience shown by the consumers is a novelty that needs to be extended to other services and goods in Ghana. It would be recalled that following the increase in the water and electricity tariffs the water producers increased the wholesale price of water from

one cedi eighty pesewas, to two cedis, twenty pesewas, while a sachet of water went for fifteen pesewas instead of ten pesewas.

A cross section of Ghanaians in and around Accra kicked against the increases in the price of sachet and bottled water.

In and around the Dome Market in the Dome Kwabenya Constituency many people especially passengers' on vehicles who hitherto patronize the sachet water refused to pay 15pesewas for sachet water insisting that it is not realistic saying that it has to be 12 pesewas. After succeeding in fighting against the increase in the price of sachet water the next thing is for the consumers to help in resolving problems of increase in the cost of domestic and industrial water and electricity. Most families are hoping for a reduction in the current tariffs of water and electricity to give the private entrepreneurs room to be able to fend for themselves and families. The average families would need to pay for water and electricity be able to feed their families and offer support to their wards in schools and colleges and to learn some trades.

The Trades Union Congress (TUC) and some civil society groups have kicked against the increases in water and electricity tariffs for domestic and industrial and commercial users saying that would be counterproductive. TUC says the recent tariff increases announced by the Public Utilities Regulatory Commission (PURC) are too high for Ghanaian workers to pay.

According to group the new tariffs are 'unfair and insensitive'.

Speaking on Eyewitness News convener of the group, Kwesi Pratt, Jnr said ''the imposition of these tariffs is an attempt to pass on the cost of inefficiency and maladministration to innocent consumers of the utilities.''

He said utility companies in the country have been engulfed by corruption and wastage during the generation and production of electricity and water respectively.

The CJA in a statement said ''… it is time to take a long term view of meeting the energy and water needs of Ghana. This must necessarily include efforts to reduce the cost of generating power and producing potable water for mass distribution.''

Currently as a result of the tariff increases that are likely to affect their production, the mining industry in Ghana is poised to offload close to 4,000 employees across the country. According to Dr Tony Aubyn Chief Executive Officer of the Ghana Chamber of mines, some of the mining companies have began giving hints of how many employees they would throw out of employment in the coming days.

The organized labor has served notice giving an ultimatum to government to do something about the price hike in utilities or risk having the entire workforce in Ghana to embark on strike on October 18. This has led to the government entering into negotiations to resolve the matter. It is the hope of all well meaning Ghanaians that this matter would be solved to save the whole nation some anxious moments.