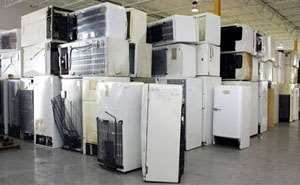 About 34 containers laden with about 3,400 used fridges were impounded at the Tema port.

Briefing the media in Accra, Victor Owusu, Public Affairs Officer of the Commission, said Environcom Limited, a UK company imported 17 out of the 34 containers, stating that the Commission warned management of the company against the importation of the used refrigerators but it was adamant.

He said the used items would be dismantled at the facility of the City and Waste Management Company.

Mr. Owusu said the seized items would not enter the market, stating that the Commission had already seized 58 refrigerators and 77 second-hand air conditioners which are being dismantled.

The ban on the importation of used fridges and other electronic gadgets is part of a grand energy conservation measure, which the Energy Commission is undertaking, per a Legislative Instrument that came into force in January 2013.

He said the Commission would enforce the law, stating that 'the law says a person who contravenes the regulation commits an offence and is liable for summary conviction to a fine not exceeding 250,000 or a term of imprisonment of not more than 12 months.'

Mr Owusu said the sanction would be applied, adding that 'the most important thing for us in spite of the sanctions is to see that these used items don't enter the country.'

He assured the public that they were working relentlessly to curb the illegal trend, urging them to exchange their old fridges for new ones.

The Energy Commission, in September last year, introduced a scheme to encourage consumers to turn in their used fridges for new ones at discount.

After a pilot project in Accra, the Commission announced in May 2013 that the scheme would be al parts of the country.

Mr. Owusu said 4,000 refrigerators had been exchanged since the scheme started on September 19, 2012.

This means that the Commission has removed the same number of inefficient refrigerators and from various households and replaced them with new energy-efficient ones, he said.

'This in effect cut electricity consumption in those households,' Mr. Owusu said.

He said the Commission would exchange about 50,000 units of refrigerators by the end of the three-year programme.