Trader in court for fraud 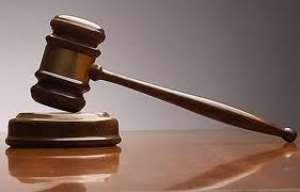 Accra, Nov. 5, GNA - Nii Okai Reindolf, a trader, on Tuesday appeared before an Accra circuit court for conspiring to defraud and defrauding by false pretence.

Nii Okai pleaded not guilty to the charges and the court, presided over by Madam Ellen Amoah, admitted him to a bail in the sum of 30,000.00 with one surety to reappear on December 2.

Police Chief Inspector Patrick Hanson said the complainant, Flt. LT. Ibrahim A. Eliasu, is an Air Force Officer based in Tamale, while the accused person is a trader residing at Haatso.

He said on August 14, 2012, one Adams called the complainant on his cell phone and introduced himself as an engineer from Tullow Oil Limited and that their company was in need of oil drilling rigs.

He said Agnes then forwarded a text message to the accused person containing an account number of Ecobank, Haatso branch.

After the complainant paid the money, Adams, Dr Smith, and Agnes no longer picked calls from the complainant, and so he reported the matter to the police and the accused person's account was frozen.

The prosecution said on August 20, 2013, the accused person was arrested by the Homicide Unit of the Criminal Investigations Department for similar offence and he was handed over to the Commercial Crime Unit.

During interrogation, he admitted the withdrawal of GH¢20,500.00 from the Ecobank account in August 2012.

According to the accused person, he handed over the money to one Kelechi and Michael, both Nigerians, who fake their names as Adams, Dr Smith and Agnes and that they were nowhere to be found.