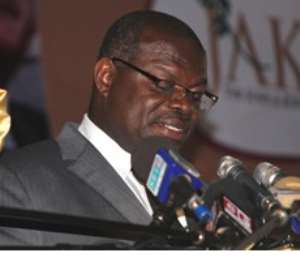 Professor Ernest Aryeetey, Vice Chancellor of University of Ghana (UG), has advocated massive investment in the manufacturing industry in Africa to boost the economy and create more jobs.

He said an African country that does not create jobs would always be dependent on other countries who would in turn demand the enforcement of their own policies which may not be the best for the country.

Prof Aryeetey expressed the view at the second of two series of the 7th Archbishop LeMaire Memorial Lectures on the theme: “The Changing State in Africa and Christian Leadership,” at the Christ Church Anglican Cathedral in Cape Coast.

The lecture series, which are organised by the St Nicholas Anglican Seminary every October was, instituted in 2007 in memory of Archbishop Ishmael Samuel Mills LeMaire, the first Ghanaian Anglican Diocesan Bishop of Accra for his immense contribution to mission and ministry of the Church notable among them being his initiative that led to the establishment of the Seminary.

The lectures brought together the Clergy and members of the Anglican Church, some members of the LeMaire family and Lecturers and Seminarians from St Peter’s Catholic Seminary and St Nicholas Anglican Seminary both in Cape Coast and a cross section of the public.

Prof Aryeetey spoke against the lack of transparency in leadership in a secular state, adding: “If there are laws in a country that require transparency, corruption will not be necessary and things will change.”

He charged Christian leaders to be service-minded, not self-serving and embrace feedback in order to be effective.

The Professor set the records straight on the recent media reportage that suggested that UG had rejected qualified applicants explaining that it was not a deliberate attempt but due to the competitive nature of this year’s selection process.

He gave instances where a qualified applicant had to be denied admission because others had better grades and called on students to work harder to obtain the very best of grades in order to gain admission into any tertiary institution without stress.

The Lord Bishop of the Anglican Diocese of Cape Coast, Right Reverend Daniel Sylvanus Adotei Allotey noted that Ghana is going through stormy times because citizens demand more but are unwilling to sacrifice and invest in human resource.

He called on the citizenry to do their best in their chosen field to help make Ghana a better place to live in.

He entreated Christian leaders to be constantly reminded of their role in society building.

Prof Yaw Afari Ankomah, Director of the institute of Economic Planning and Administration, of the University of Cape Coast, who chaired the function, said leadership is necessary to guide actions in the society and therefore urged both Christian and secular leaders to lead exemplary lives to influence people to achieve the best.

He said Christian leaders have a role in the development of the society and urged them to work assiduously towards the objective, since the church would equally be affected if the nation goes through turbulent times.

A minute silence was observed in memory of the late Archbishop LeMaire, while prayers were said for his family.