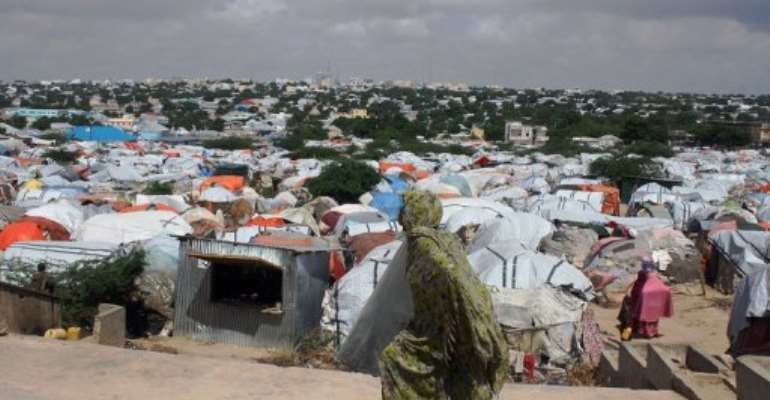 A Somali refugee walks in front of a camp for internally displaced people in Mogadishu on December 4, 2012. By Abdurashid Abdulle (AFP/File)

With no formal banking system, diaspora Somalis turn to money transfer services to support their families back home, sending some $1.3 billion (one billion euros) each year, according to aid agencies Oxfam and Adeso.

Barclays, the last major British bank still working with transfer companies, had said it would close all dealings with money transfer systems, cutting a $500 million yearly flow to Somalia.

The bank defended the move citing fears of money-laundering and the financing of terrorist activities.

But Dahabshiil challenged it in a London court.

"The court handed down its judgement, granting an interim injunction which has the effect of preserving Dahabshiil's banking arrangements with Barclays until the conclusion of a full trial," the company said in a statement.

In a first reaction a Barclays spokeswoman later said the bank was "very disappointed at today's decision, and we will be appealing.

"Barclays made a legitimate decision to exit these businesses based upon the well-known risks of money-laundering and terrorist financing in the money service business sector.

"The risk of financial crime is an important regulatory concern, and we take our responsibilities in relation to this very seriously."

Banks have been tightening rules in a bid to comply with international regulations against money laundering and funding terrorism, but experts said there were no known cases of regulatory breaches by Somali companies.

"We are not just a business.... We enable Somalis to help themselves, by sending money to every corner of the Somali territories to enable relatives and friends to buy food, medicine and to pay for education," the company added.

It was feared that closing organised transfers could drive them underground.

Somali Prime Minister Abdi Farah Shirdon welcomed the decision, while warning that a "permanent solution must be found to keep open this vital lifeline".

The best solutions would be to set up formal banking systems, experts say.

But regulations require that transfer systems pass money through a bank account.

"As Somalia continues to recover from two decades of unrest these remittances remain an essential source of income for more than half of all Somalis," Shirdon added.

"To many these remittances pay for a basic standard of living, allowing families to put food on the table, clothe their family, treat illnesses and educate their children."

Charity groups have been campaigning to keep the transfer system afloat.

"The ruling provides a small window of opportunity for Somalis living in the UK to send money home to loved ones in one of the poorest countries in the world," Oxfam's Ben Phillips said.

"However, this does not solve the problem," he added. "A long-term fix is needed to safeguard hundreds of thousands of people relying on the money for food, medicines and education."