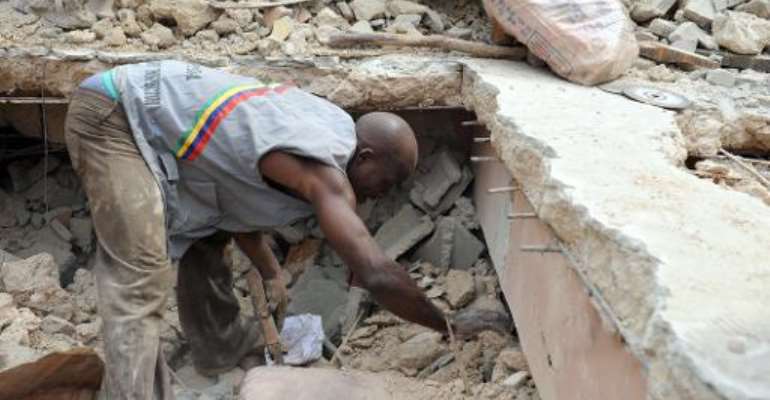 Rescue workers remove a carpet from the rubble of a collapsed four-storey building at Idumota in Lagos on July 7, 2011. By Pius Utomi Ekpei (AFP/File)

Lagos (AFP) - Four people were killed and 25 others injured when a four-storey building under construction in an upscale area of Nigeria's economic capital Lagos collapsed, the head of the city's emergency services said Tuesday.

"A twin four-storey duplex in Victoria Island collapsed on Monday. We brought out four dead bodies while 25 others with injuries were rescued by our team," Femi Oke-Osayintolu, of the Lagos State Emergency Management Agency (LASEMA), told AFP.

He said the victims -- all construction workers -- were on site at the time of the incident on Victoria Island, where property is among the most expensive in Africa.

The cause of the collapse was not immediately known.

"We have completed (the) rescue operation, The next stage is to clear the debris after which an inquiry will be instituted to determine the cause of the incident," Oke-Osayintolu added.

The injured were receiving treatment in hospital.

Building collapses are common in Nigeria because of the use of sub-standard material and flouting of construction regulations.