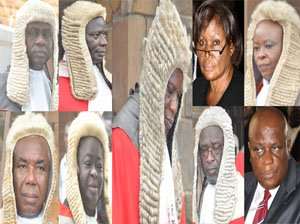 Dr Maurice Ampaw, President of the Legal Advocacy Foundation, has called on Ghanaians to carefully interrogate the issues raised by the Supreme Court Justices in the election petition judgment rather than attack and insult them.

He said the post-election petition discussions should not be used to attack the justices, stressing that Ghanaians must question their decision in terms of their knowledge of the law.

Dr Ampaw was speaking at a special forum organized by the Media Foundation for West Africa (MFWA) on the theme, 'Media's coverage of the 2012 Election Petition adjudication: Successes, challenges and the way forward' in Accra.

Dr Ampaw, who spoke on the topic: 'the legal perspectives on the media's coverage of the 2012 Election Petition adjudication and Post-verdict media discussions,' said it was unfortunate that people they were attacking and insulting justices instead of interrogating the issues they raised.

The way the verdict was delivered, however, did not meet the aspirations of most ordinary Ghanaians though there were various explanations provided from the majority and minority on the panel, he said.

He said comments from Tsatsu Tsikata, Counsel for the NDC in the election petition, against one of the judges also opened the floodgates for all sorts of attacks and insults on the justices.

Dr Ampaw further called for a serious national debate on the law governing the presidential election petition in the country.

He said Articles 62, 63 and 64 of the 1992 constitution are serious provisions that have to be looked at, adding that these three laws actually favour any respondent in a petition as they suggest that the person declared by the EC is presumed to be validly elected.

Dr Ampaw argued that the same Article 64 which allows the President of the country to be sworn in while the election petition is ongoing makes it incongruous.

Professor Kwame Karikari, Executive Director for MFWA, who gave an overview of the media monitoring exercise, said the media has a prominent role of being a watchdog over the Executive as well as the citizens.

He said it was unacceptable for politicians to use the airwaves to do things that do not help the people and hinder development.

'It is our democratic right for politicians to tell us their agenda or what they intend to do for the people,' he added.

Professor Karikari said the media has a responsibility to be professional and ethical by doing things that would help the citizens understand issues in the society.

Despite some improvement in journalism practice in the country, we are still not there yet when compared to the standards of the profession in Ghana with those of other Africa countries such Kenya, Senegal, Nigeria and South Africa, he said.

He said Ghanaian journalists have the responsibility to keep improving themselves in order for the citizens to benefit from public affairs discussions and be better enlightened.

Professor Karikari also noted that in spite of the difficulties facing the media, they had created the atmosphere for tolerance by allowing people with different viewpoints to express themselves through debate and arguments.

He said MFWA would continue to work with the media to improve journalistic standards in the country.