DANGER @ AIRPORTS … T'di, Sunyani Have No Scanners; Lives At Risk 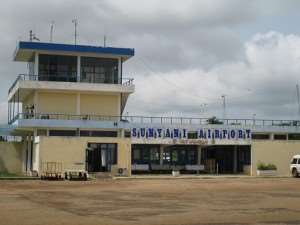 In this era of terrorism, where terrorists are attacking from all angles, a development which has forced airports putting in place security measures to protect life and property, reports reaching The Chronicle indicate that the Sunyani and Takoradi airports have no security scanners, thus putting the life of passengers at great risk. Available information indicates that instead of the passengers and their luggage going through the scanners to detect whether they are carrying any explosive material or not, security personnel are rather doing a manual examination of luggage.

Apart from the discomfort this manual examination is causing the passengers, since they have to remove everything from their bags for a physical examination, it also has the potential to cause a major security problem for the country if a terrorist manages to smuggle explosives onboard the aircraft, and this is a worry to industry players.

Investigations conducted by The Chronicle revealed that some time ago, the Ghana Airport Company Limited (GACL) budgeted for $7 million to buy scanners and install them at all the domestic airports, but for whatever reasons, the decision was never implemented, putting the lives of passengers in a danger.

http://thechronicle.com.gh/wp-content/uploads/2013/11/Kumasi-Airport.jpg It was further established that Ghana, at the moment, has an annual domestic passenger turnover of 800,000, but should anything untoward happen, this figure could whittle down considerably, and eventually collapse the domestic air travel industry. The Commercial Manager of Antrak Air, Mr. Antwi Boasiako, admitted in a telephone interview with The Chronicle that the non-availability of the scanners at the airports was a bother to them as airline operators.

According to him, it would be very difficult to detect a passenger who is smuggling, for example, a letter bomb, into a plane through a manual examination of his or her luggage.

Mr. Boasiako further told The Chronicle that human life could never be valued, and that was why he expected the authorities to attach serious importance to the scanner issue, by making sure that the problem is addressed in the interest of passengers who patronise the domestic airlines. Another challenge facing the domestic airline industry is the non-availability of lights at the Kumasi and other domestic airports to ensure take-offs and landings during the night. At the moment, all the domestic airlines are grounded after 6:00 p.m., a development which is affecting the rapid growth of the industry.

The Chronicle is informed that some time ago, Citi Link, a domestic airline, in its attempt to help solve the problem, volunteered and imported some of the landing lights to be installed at the Kumasi Airport, which constitutes over 60% of the domestic passenger fleet, but the authorities which were supposed to help clear the items from the port never did so, leading to the eventual stealing of the lights at the port.

Efforts made by The Chronicle to confirm this allegation from Capt. Tei Azu, who speaks for the Citi Link, proved futile. Though the call went through, somebody picked it and claimed Capt. Azu was not available, and that he would return the call when he comes back, a promise which was never honoured.

The Chronicle checks revealed that the installation of the landing lights would not cost the nation anything more than $150,000, but the problem has been lingering for years without any solution. Mr. Antwi Boasiako, again, admitted that the lighting problem was affecting domestic airlines, pointing out that they had employed pilots they have to pay at the end of the month, but at 6:00 p.m. every day, they have to park the planes because they cannot fly. He recalled how they lost business because they could not fly the Black Stars to Accra to catch a flight to Japan after the World Cup match against Zambia in Kumasi.

Boasiako, again, noted that his airline was trying to start flying to Wa to help open up business potentials in the region, but they were being confronted with a number of challenges. The Wa airstrip, at the moment, has no security features that will ensure the smooth operation of airlines.

He said they have written to the Ghana Airports Company Limited to allow them partner the Wa Municipal Assembly to develop the airstrip for airline operations, they were yet to receive a response.

He, however, admitted that unofficial communication had been going on since they wrote the letter, and hoped something good would come out of it.

According to the Commercial Manager, Wa operations would definitely not be lucrative to help them break-even, but they still considered that route as a corporate social responsibility they must fulfill to the people who patronise their services.