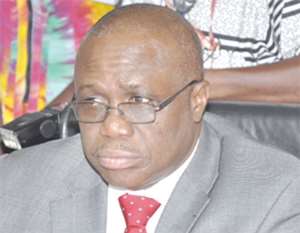 The amount gives the firm a controlling stake of 90 per cent in the bank, leaving the minority 10 per cent to the country's pensions fund manager, SSNIT.

Fortiz, which undertakes private equity investments in strategic sectors in the economy and on the continent at large, bought the 90 per cent stake from SSNIT and the SIC Financial Services Limited.

The takeover was approved by the Bank of Ghana (BoG) mid last week, paving the way for fresh capital to be injected into the financially distressed bank.

The Vice President of Fortiz Fund, Madam Yvonne Ofosu-Appiah, told the Daily Graphic on Friday, that his outfit was now prepared to return Merchant Bank to its glorious past.

'We specialise in investing in distress companies, especially those that have a lot of potential for growth,' she told the paper on a telephone interview.

'Our aim now is to make the bank one of the best top banks in the country in the shortest time possible,' she added.

Cheap Price?
News of the successful takeover of a majority shareholding in Merchant Bank by Fortiz came after a previously proposed takeover of the bank by the Rand Bank of South Africa failed to materialise.

That breakdown in the acquisition process further deepened the financial worries of Merchant Bank, then forcing its unionised staff to call for government interventions.

Given that the majority shareholders at the time had stopped injecting capital into the bank, its financial strength and ability to operate efficiently moved from bad to worse, causing the BoG to intervene with some funds.

The BoG has as mandated by law, to take over the management of banks that are financially distressed.

Madam Ofosu-Appiah admitted in the interview that Merchant Bank's distress nature caused the bank's value to deteriorate, partly accounting for the price that its 90 per cent stake was sold for.

'What feeds into the price of an acquisition is the assets and liabilities of the institution and as it is, Merchant Bank's assets were in the negative and that really determined the price,' she said.

She, however, disagreed with suggestions that the situation enabled Fortiz Fund, which is wholly-owned by indigenes, the chance to offer a lower price for what would have hitherto been a golden offer.

'The price was really competitive and it was agreed to by all the stakeholders,' she noted.

Rebranding Merchant Bank
Although Fortiz's Veep said the GH¢90 million was paid upfront, she added that the agreement with BoG and SSNIT was that the equity firm should pump in some GH¢50 million into the bank next year should the need arise.

'We agreed with the BoG that if the Merchant Bank later needs some more capital to be able to meet regulatory guidelines, then we will willingly offer it,' she said.

Going forward, Madam Ofosu-Appiah said the fund would work at rebranding the bank as part of efforts aimed at ensuring that the firm gets value for the GH¢90 million investment.

'Nobody puts money into something and allows it to remain the same. We are going to invest in the human resource to make sure that they are well equipped to develop the necessary services and products for customers,' she said, adding that more funds will  also be pushed into information, communication technology (ICT) and related areas.

On whether or not his oufit intends changing the name of the bank, Fortiz's Veep said:'that is something we and the stakeholders haven't concluded on yet.'

Ownership of Fortiz
Th FirstBanC Financial Services Limited (FirstBanC) is the general partner of the fund.

FirstBanC is an investment banking and asset management company that leverages the expertise of its cadre to provide world-class investment advisory services to its clients.

FirstBanC is also the investment advisor to all the private equity funds overseen by Fortiz.

The other top three investors of Fortiz are Dr Kingsley Fletcher also known as Nene Drolor Bosso Adamtey I. He is the Chief Executive Officer of Fletcher International Services Inc, USA, and the Suapolor of the Se Traditional Area.

The rest are Mr Emmanuel Botchwey, the founder and majority shareholder of Regimanuel Estate Limited and Mrs Aurore Selormey, the Chairperson of the fund's board.